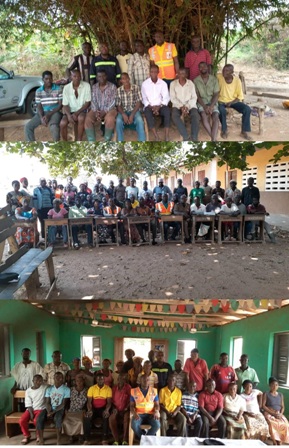 Mr. Ellis Aloryi, the Sekyere Kumawu District Fire Officer of the Ghana National Fire Service (GNFS), has urged farmers to intensify efforts on bush fire prevention in order to safeguard the gains of the Planting for Food and Jobs (PFJ) as well as the Planting for Exports and Rural Development (PERD).

He said the two government flagship programmes, were crucial investments and interventions to ensure sustained food security towards national development, thus everything must be done to consolidate the gains.

Mr Aloryi was speaking at a public forum held at Nkwanta, a farming community in the Sekyere Kumawu District of Ashanti, as part of a district collaborative fire prevention sensitization programme.

Under the intensified fire prevention education campaign, the District Directorate of the National Disaster Management Organization (NADMO), is partnering the District’s GNFS and the Ministry of Food and Agriculture (MOFA), to educate the farmers on the dangers of setting fires on their farms during the dry harmattan season.

Fires could easily spread to destroy lives and properties due to the harsh weather conditions, during these periods.

The District Fire Officer, though could not readily give statistics on fires and its fatalities in the District, however, pointed to negligence as the main cause of domestic, bush and other fires in the District and called on the public to be vigilant so as to prevent fire incidences and accompanying fatalities.

Mr. Emmanuel Obeng, the District Director of the NADMO, said a Fire Volunteer Corps numbering more than 600 which was inaugurated last year in February at Pepease for 23 communities, to facilitate, promote and sustain the prevention and control of bush and domestic fires.

“These fire volunteer corps in your communities have received the requisite training in the prevention and control of bush fires and how to identify and report bush fire offenders to the appropriate authorities.

He called for collaboration between the volunteers and community members in finding sustainable solution to fire prevention”, the NADMO Director added.

“The reminder to farmers on the consciousness of fire prevention in seasons like this is crucial in the prevention and destruction of life and farm properties which have been rampant in the area in the past years.

Though we do not have statistical records to buttress our point, we believe the wails and cries of farmers every year due to bush burning, is evidence enough”, Mr. Obeng added.

Mr. Godfrey Appiah Acheampong, the District Director of MOFA impressed upon the farmers to develop fire belts – setting protective boundaries around their farms in the event of clearing and burning their lands during seasons like these, so that the fires do not spread to other farmlands.