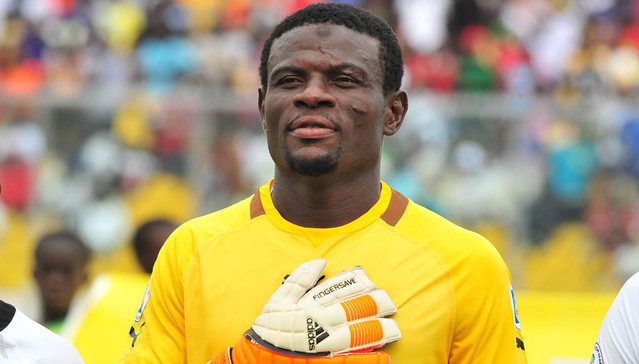 Black Star goalie Fatau Dauda has confirmed that he was not fully fit for the second leg of the CHAN qualifier away in Abidjan that is why he was dropped by coach Maxwell Konadu.

Head coach of the side, Maxwell Kondau had revealed that Fatau was not fully fit for the trip hence his exclusion from the team to play the second leg.

A section of the media reported that Fatau had claimed he was suffering from Malaria hence the decision to exclude himself from the team.

But the former Kaizer Cheifs goalie has confirmed Maxwell Konadu’s statement in an interview with Happy FM in Accra saying he was not fully fit for the trip.

“As a senior player in the team, I should always lead by example. I was not fit for the trip and I shouldn’t hide it. I told the team and the doctor also confirmed it,” Fatau said.

“I have always told the players to ensure that we are all fully fit for the second leg so it would have been bad for me to go with the team after having that slight injury,” Fatau added.

The Local Black Stars missed out of the 2016 CHAN tournament after losing the game to their Ivorian counterparts by a lone goal.

Implement the National Gender Policy to the fullest – Ministry urged