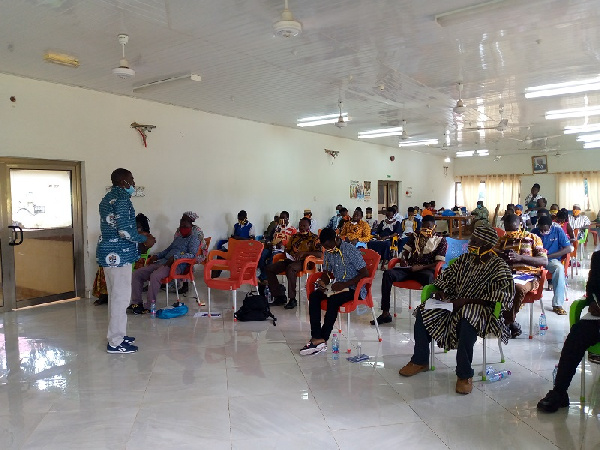 Mr James Twene, the Upper East Regional Director of Department of Gender (DoG) has called on members of Faith Based Organizations (FBOs) to use their platforms to campaign against dehumanising socio-cultural practices.

He said some of the practices and beliefs were unfavourable to women and did not support the fight against Sexual and Gender-based Violence (SGBV).

Mr Twene made the call at a Faith Based Organization and Community Structure Leaders forum aimed at deliberating on teenage pregnancy and child marriage in the Nabdam district.

The meeting was organized by the Upper East Regional Coordinating Council (RCC) in collaboration with Department of Gender (DoG) and funding support from the United Nations Population Fund (UNFPA).

The DoG Director said although both boys and girls experienced Sexual and Gender-based Violence, girls were more affected and it was therefore necessary for stakeholders to put in measures to safeguard adolescents from exploitation.

He appealed to opinion leaders to desist from interfering in cases of abuse and allow perpetrators to be reported to the appropriate authorities for necessary sanctions to be taken.

Mr Dennis Asolmia, the Adolescent Focal Person at Nabdam District Health Directorate, in a presentation said Nabdam had a high rate of teenage pregnancy, although the district had three adolescent-friendly corners where issues of adolescent reproductive health were mostly discussed.

Mr Asolmia said the situation had led to the rise in some health complications such as, anaemia in pregnancy, low birth weight and still birth, among others in the district.

Mr Asolmia called on stakeholders to be comprehensive in their sex education by encouraging abstinence and also exploring the various options available for teenagers who could not abstain from sex.

Mr Maclean Abuntoo, a Mental Health Coordinator of the Nabdam District, said four girls had so far attempted to commit suicide, this year, over teenage pregnancy, but were rescued and brought to the mental health unit and attributed the cause to ill-treatment meted out to them by their families and society.

Mr Abuntoo said the trend of teenage pregnancy in the district was worrisome and urged parents to desist from forcing pregnant teenagers into marriage.

“We all understand that it is difficult, but when we support them through that period it would help those who are brilliant and want to go back to school to make it,” he added.