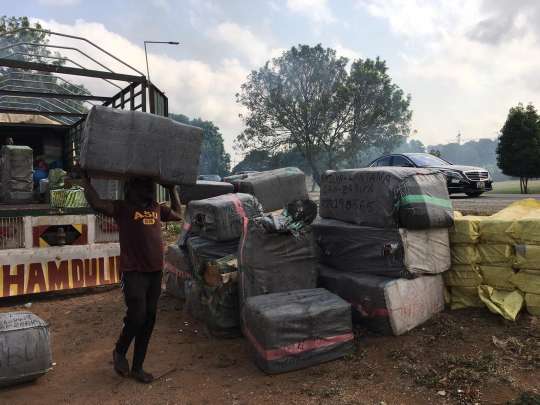 The Ghana Police Service in collaboration with the Food and Drugs Authority (FDA) and the Customs Division of the Ghana Revenue Authority have intercepted a 40-feet truck full of contraband goods that were smuggled into Ghana on Tuesday, March 10, 2020.

The goods, believed to have been smuggled from Nigeria and included sexual enhancement drugs, pirated wax prints and other pharmaceutical products, were seized at Achimota.

Deputy Superintendent of Police (DSP) Effia Tenge, Head of the Public Affairs Unit of the Accra Regional Police Command, told the media that police had a tip-off that the truck with the registration number AE 960 JEG was loaded with goods believed to be contraband had arrived from Kano in Nigeria.

She explained that the goods were about to be offloaded within Accra and its environs, thus, police rushed to the scene and arrested Sani Mohammed, the driver of the vehicle, together with the goods.

DSP Tenge said the vehicle was impounded at the Regional Police Headquarters for investigations and a search in it revealed a quantity of the pirated wax prints and the pharmaceutical products.

The police then invited the FDA and the Customs for the necessary action to be taken, she said.
Mr James Lartey, Public Relations Officer of the FDA in an interview with the Ghana News Agency, said the medicines were supposed to be imported to Ghana via two approved routes.

He named the two legal routes as the Kotoka International Airport and the Tema Habour, adding that anywhere else was illegal.

Mr Lartey said one could not import any drug unless it was approved, noting that there were drugs that had to be stored under certain temperatures whilst they were being imported, else, they would go bad before their original expiry date.

The Public Relations officer said drugs which have been approved would be kept under the right temperature.
The collaboration between FDA and the security agencies would ensure the safe disposal of the unapproved drugs as well as protect the lives innocent citizens.

He cautioned the public against the importation of counterfeit drugs, explaining that when found culpable, one would spend between 15 and 25 years in prison.

Unapproved importation of drugs would also lead to a fine of not less than 7,500 penalty units, equivalent GH¢90,000.00, he added.