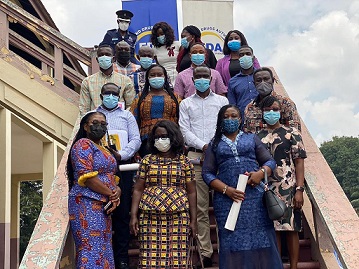 Participants at a just-ended World Health Organisation (WHO) and the Food and Drugs Authority (FDA) substandard and falsified medicines risk communications campaign have called for intensive public education and increased market surveillance on FDA’s registered drugs.

They also asked for the introduction of verification codes to ascertain the authenticity of the FDA’s registration of drugs and concerted efforts among stakeholders to fight the menace of failure of uterotonics and other medicines on the Ghanaian market.

A statement from the FDA, signed by its Head, Communications and Public Education Department, Mrs Rhoda E. Appiah, and copied to the Ghana News Agency, said the problem came to light during the month-long regional campaign which had participants drawn from varied stakeholder groups.

The groups, included the Police, Immigration, Customs Division of the Ghana Revenue Authority, representatives of Regional Health Directorates and the media.

The WHO, in a research conducted in 2017, estimates that one in 10 medical products in low and middle-income countries were substandard and falsified.

In 2009, a survey conducted by the FDA revealed that about 39.6 per cent of antimalarial medicines on the Ghanaian market were substandard and falsified.

In response to these alarming statistics, the FDA with support from the WHO launched multiple prone approaches to combat the challenge.

The approaches included a heightened public education campaign, post-market surveillance activities and stakeholder engagements in a bid to combat the illicit trade and safeguard public health and safety.

These strategic interventions culminated in a significant reduction in the statistics for substandard and falsified antimalarial drugs from the 39.6 per cent fail tests to a record low of 1.4 per cent in 2018.

To consolidate the gains, the statement said the WHO together with the FDA, in recent times, embarked on a rigorous risk communications campaign that resulted in the printing of educational posters, the production of radio jingles and the organisation of regional stakeholders and press briefings.

The regional stakeholder engagements being facilitated by the Communications and Public Education and the Drug Enforcement Departments of the FDA began on Monday, September 20, 2021, in the Central and Volta regions.

This was to generate intense public discourse on issues of substandard and falsified medicines.

Mr John O. Tetteh, the Head of FDA’s Central Regional Office, in a welcome address, said about 116,000 persons died annually using substandard/falsified antimalarials leading to the loss of about US$38.5million in Africa.

He, therefore, assured participants that the FDA with the assistance of agencies like the United States Pharmacopeial Convention, the Global Fund and the WHO would continue with its market surveillance activities to raid the Ghanaian market of these substandard and falsified medicines.

In a presentation on the overview of the project and the current state of substandard and falsified medicines in the country, Mrs Appiah, the Head of Communications and Public Education noted that the relatively weak regulation of pharmaceutical products in neighbouring countries were some of the factors that gave rise to the proliferation of the trade in the country.

She emphasised that the Authority, with support from the government, was working with neighbouring countries through the West Africa Health Organization, the WHO and the International Police to seize and safely dispose of many of such products.

Mrs Appiah briefed participants on some of the available avenues for reporting any suspicious activities involving substandard/falsified medicines like contacting the Authority through its hotlines, social media platforms and the Medsafety App, especially in situations of adverse reaction from the intake of any drug.