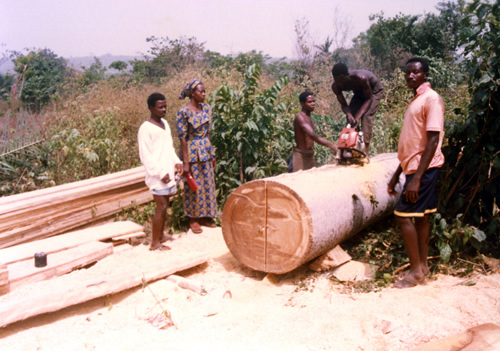 The Goaso and Bechem District Offices of the Forestry Services Division (FSD) in Brong-Ahafo have upped measures to clamp down on activities of illegal loggers, to preserve forest reserves in the region.

According to the Divisions, the rate at which the Bosomkese, Aparapi, Ayom, Abonsare, and the Bonsam-Bepo forest reserves in the areas were depleting due to uncontrolled illegal logging required radical approach to deal with perpetrators.

In addition, the team successfully impounded several trucks loaded with illegal lumber during the exercise which was conducted in forest fringe communities – Kasapin, Tipokrom, Asumura, Gambia, Bomaa, Yamfo, and others.

This came to light when Mr Kwadwo Owusu Afriyie, the Chief Executive Officer of the Forestry Commission (FC) embarked on a two-day working visit to inspect afforestation programme being undertaken by the commission in some forest reserves in the Brong-Ahafo Region.

He was accompanied by some members of the FC Board, including; Brigadier General (Retired) Joseph Odei, its chair and other key staff of the FC.

Briefing the CEO and his entourage on the general situation at the Ayom and other forest reserves in the Goaso District of the FSD, Mr Godfred Quarshigah, the District Manager said more than 200 of the illegal chainsaw operations arrested were prosecuted and fined.

He said activities of the chainsaw operators remained serious threat to the forest which was one of the largest in the region saying on-going re-afforestation programme was steadily progressing.

Mr Quarshigah said about 80 percent of the forest was depleted, and mentioned wildfires as another major cause of depletion.

He commended beneficiaries of the Youth Employment Agency (YEA) engaged in the re-forestation programme for their hard work and appealed to the Commission to expedite action for the payment of arrears .

Mr Obeng Boamah, the Bechem District Manager of the FSD, said illegal logging and perennial bush fires had devastated the Bosomkese and Aparapi forest reserves, and appealed to the local communities to support in the fight against illegal lumbering and logging.

He said many of the culprits arrested last year were still facing trial, and expressed the hope that the courts would facilitate speedy prosecution of the cases.

Mr Afriyie expressed discomfort with the level of depletion after touring the forest reserves, and directed the managers of the FSD to be on the ground to ensure that the plantation exercise yielded desirable outcomes.

Abesim Murder: Former Assemblyman identifies one of the victims as his missing son