SANAA — The Saudi-led coalition fighting Yemeni dominant Houthi rebels killed at least 11 women in an airstrike on a funeral house north of the capital Sanaa on Wednesday, a medic and security official said. 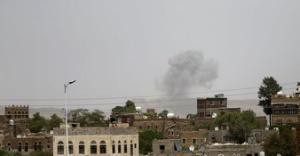 Ten others, also women, were critically wounded “when the airstrike hit the funeral in Shira area in Arhab district,” the medic added, saying that the death toll is likely to increase. (Yemen-Rebel-Airstrike)
– – – –
ALGIERS — Algerian counter-terrorism troops on Wednesday killed five armed militants and retrieved weapons in a wide-scale operation in the province of Bouira, 110 km east of Algiers, said a statement of the defense ministry.
The operation has been launched in the dense woods of Laadjiba in Bouira with accurate information of a terrorist group there, said the statement. (Algerian-Terrorist-Bouira)
– – – –
BANGKOK — A chain collision involving four vehicles killed nine people on Wednesday in northern Thailand, local media reported.
The accident happened Wednesday afternoon in Chiang Rai when a cement truck veered off the road median strip and collided with an incoming van and a car behind it. (Thailand-collision-Van)
– – – –
UNITED NATIONS — The World Food Programme (WFP) on Wednesday said that more than 3 million people are in need of humanitarian assistance in eastern Ukraine, and the UN agency will continue to help 220,000 people in conflict-affected areas in the region throughout 2017, a UN spokesman told reporters here. (WFP-Ukraine-UN)
– – – –
PARIS — An 18-year-old student suspected of preparing a terrorist assault was arrested on Tuesday morning in Wattignies, north France, a regional TV channel reported on Wednesday.
Based on elements found in the suspect’s computer, the man planned to attack a metro station or shopping centre in Lille, France 3 Hauts-de-France said. (France-Student-Lille) Enditem