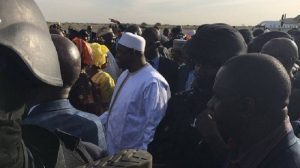 The move was seen as a goodwill gesture from Barrow, whose inauguration on Saturday as the third president of The Gambia coincided with the 52nd independence anniversary. (Gambia-Barrow-Prisoner)
– – – –
ATHENS — Two policemen were slightly injured on Sunday in a petrol bomb attack at the Greek ruling Radical Left SYRIZA party headquarters by a group of carnival masked persons, according to Greek police.
Some 30 individuals participated in the incident, according to the police officers who came under attack at the building’s entrance in central Athens. (Greece-Bomb-Police)
– – – –
LOS ANGELES — U.S. space firm SpaceX launched its 10th cargo mission to the International Space Station on Sunday morning from U.S. space agency NASA’s historic moon pad for the first time.
A Falcon 9 lifted off on time at about 09:39 a.m. EST (1439 GMT) from U.S. space agency NASA’s historic Launch Complex 39A (LC-39A) at NASA’s Kennedy Space Center in Florida for the first time, NASA TV showed.(US-SpaceX-NASA)
– – – –
BAGHDAD — Iraqi security forces on Sunday announced the commencement of a new phase of offensive to drive out the extremist militants of Islamic State (IS) group from its major stronghold in the western side of Mosul, the Iraqi military said.
The Iraqi army, federal police and some paramilitary units of the Hashd Shaabi have started their advance in the early morning from south and west of the Mosul. (Iraq-IS-Mosul) Enditem