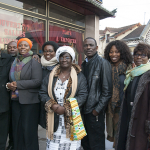 The Federation of Ghanaian Diaspora in Europe which?s creation happens to be the major outcome of the meeting on Ghana?s Diaspora Engagement Policy held in Brussels under the auspices of the European Union?s MiEUx , ICMPD and Ghana?s Ministry of Foreign Affairs last October 2015, has ended it?s inaugural meeting in France last 22/02/2015.

The meeting took place at the Mariott?s Village Hotel near Disneyland Paris and It was stretched over 3 consecutive days thus from 20th-22nd February 2015.Whilst in France, FEGHADE representatives who came from six countries in Europe had a special meeting with Diplomats from the Ghana Embassy, Chiefs on the Ghana Traditional Council, Religious leaders, Association, Church and Youth Leaders. The meeting took place at Pierrefitte-Sur-Seine near Paris and also close to the Church of Pentecost.

Nana Ansah Sasraku on behalf of the Ghanaian Community in France lauded the FEGHADE cause. He thanked the delegates for electing France as it?s Presidence across the GHACIF President Hon. Osei Mensah. He declared the official support of the Ghanaian Community in France for FEGHADE which he sees as a great evolution of our progress for Ghanaians abroad.

Nana Ansah Sasraku has promised to accompany the FEGHADE President who is his subject in the accomplishment of his duties, whenever he can. He said that, France needs to set a leadership example and also show a success yielding way forward.

Jacqueline Dake who represented the youth magnetised the audience with a very touching admiration for FEGHADE and what it entails.

The leading MCs of Ghanaians in France, Mr. Boahen and Mr. Appiah Francois who double as PROs for Ghacif were present. In two speeches, they presented our community and promised to spread the FEGHADE news.

Mrs. Agnes Nsiah Debrah, Ghacif Organiser led a Ghacif Delegation to meet the FEGHADE delegates. In a prayer she asked for God?s guidance for FEGHADE.

Miss Doris Vidda from the Netherlands in a vote of thanks thanked the Ghana Embassy and the Ghanaian Community in France for the warm reception, interactions and their support for FEGHADE.