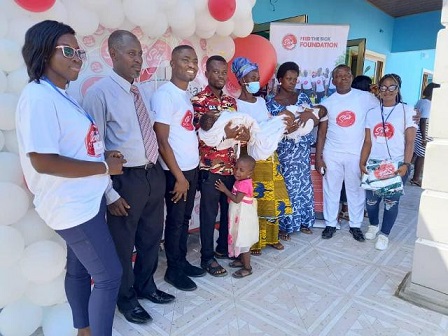 Feed the Sick Foundation, a Non-governmental organization which supports the sick and less privileged has been launched at Winneba.

Pastor Jerry A. Martey, founder and Chief Executive Officer of the Foundation, said it commenced operations in 2018 and piloted with few members and currently had 500 members in the country.

He said its mission was to offer assistance to the sick, less privileged families and communities to help sustain and maintain better health for people of all ages.

It also seeks to empower the youth, touch and transform lives, with contributions by the members and donations from other benevolent organisations.

Pastor Martey, also a nurse at the Trauma and Specialist Hospital at Winneba, said he had a revelation during one of his quiet times in 2018 to help the sick.

“I shared the vison with few faithful friends who gave me their support, hence the formation of the Foundation, which has helped to solve many challenges of people battling with illness and financial restraints in hospitals.

“It is also disheartening to find out that some of the patients who patronize hospitals have no relatives to support them, particularly to pay for their medical expenses”, he added.

Pastor Martey said the Foundation had for the past four years, been working behind the scene with the sharing of varieties of packages in many hospitals, helping the less privileged and the needy and paying medical bills for patients in critical conditions.

He said beneficiaries of the Foundation, included; heart, kidney and cancer patients on hospital admission and patients without insurance scheme but had to undergo surgical operations, babies and single parents.

A beneficiary, Madam Elizabeth Gamba who delivered triplets at the Nsaba Government Hospital together with her husband Benjamin Arhin and the family, were at the launch to express their appreciation and commended the Nurses for introducing them to the Foundation.

Also, babies in Agona Swedru Municipal Hospital maternity unit were given baby products valued at GHC10, 000.00, while a number of women who gave birth to triplets this year at Agona Nsaba Government Hospital also received items and cash as seed money to set up businesses.

One patient with kidney condition who was supported with an amount of GHC5, 000.00 unfortunately, could not survive.

Launching the Foundation, Prophet Richard Bortsie Head Minister in charge of Christian Kingdom International Church, prayed for the sustainability of the foundation and asked the Lord to protect them to continue with the good works.

Mrs. Mavis Tawiah who delivered a sermon, called on the members to be role models and be firm in the Lord to guide them in all their endeavors.