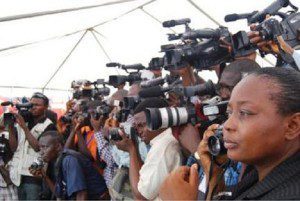 A two-day workshop dubbed: “Safety for Female Journalists” opened in Accra on Monday with a call on journalists to take opportunity of the training and professionally work with it.

Mr Roland Affail Monney, the President of the Ghana Journalists Association (GJA), who made the call, urged participants to take the lessons from the two-day training and used the knowledge acquired to enhance performance in the media landscape.

“Take good opportunity of the training you are having today and come out professionally to project our values through your work,” he advised.

The workshop, a GJA collaborative initiative with the Norwegian Union of Journalists, sought to build the capacities of participants mostly female journalist of the dangers that confronted the profession.

Mr Monney said the greatest need of Ghanaian journalists was training and the GJA was overly grateful to the Norwegian Union of Journalist and their government for sponsoring the workshop, which was happening in an exuberance move of Ghana hosting the World Press Freedom Day.

He said not only were participants going to share ideas, but they would have the tools of addressing their challenges after the training and be professionally in charge.

He lauded Norway for being ranked at number one on the 2018 World Press Freedom Index whiles Ghana is ranked 23 out of the 180 countries.

“It is therefore natural we fall on Norway for the assistance, guidance and coaching to achieve our professional mandate in the media landscape,” he said.

Madam Eva Stabell, the International Officer of the Norwegian Union of Journalists, giving the rationale for the training, said a couple of years ago there was an international survey that showed that one of the dangerous places that female journalists worked was in the news room.

“….then we already had cooperation with the Zimbabwean Union of Journalist and they were already fighting harassment; very hard for women journalists because they saw that confronting young journalists and young female students as it was a practice in the news room.”

They were shocked of the behaviour, a lot of them met colleagues, editors and sources that made them got stacked, lost their interest in journalism and it is very important that now both male and female were describing what is happening in the society.

“You are not getting more than half of the story if you only have one side of gender telling it, that is why we started this project with some pilots in Zimbabwe where we invited some African journalists unions, trained female journalists and also gave them money for workshops when they return to their various countries.

Madam Stabell noted that it was expected of Ghanaian female journalists to be more aware of the dangers, hence collaborating with the GJA for the training which was in line with the World Press Freedom Day set to be hosted by Ghana.

She admitted that, it was known by the Norwegian Union of Journalists that majority of Ghanaian journalists had been to safety trainings and may know how to take care of themselves and their colleagues, but if female journalists were not aware of the rights as women and as women journalists then we are going nowhere.

She said there were a lot of treaties and agreements and the United Nation systems that they should know and write about in their articles to educate other women.

She urged women journalists to work together and form more networks, as doing so would empower them to be strong and be able to fight sexual harassment.

Madam Stabell said at the end of the training, participants would be more aware of the dangers confronting them, take care of it, using the acquired knowledge, be aware of their rights, take it up to reflect their works and articles.

“There will be safety for female journalists where they will be strong to fight sexual harassments and any other barrier to their progress,” she said.

Mr Gunnar Andreas Holm, the Norwegian Ambassador to Ghana, opening the training, said the safety of journalist was the focus of discussion.

He said gender harassment threatened security and journalism which eventually made more women move out of their profession.

“It is therefore my believe that after this two-day training, participants would be equipped with their capacities built for a better and enhanced working environment within the media landscape,” he said.

The all-female in-depth content and participatory approach training, brought together about 15 media personnel to discuss, share, brainstorm and exchange knowledge as well as problems confronting them in their line of duties.

Some participants, who spoke to the Ghana News Agency (GNA), described the training as appropriate at a time majority of women were in the journalism profession.

“Journalist safety, media equality, freedom of speech and media freedom will be enhanced after this training, we thank the GJA and Norwegian Union of Journalists for this initiative,” Madam Mary Anane, a Journalist with the Graphic told the GNA.