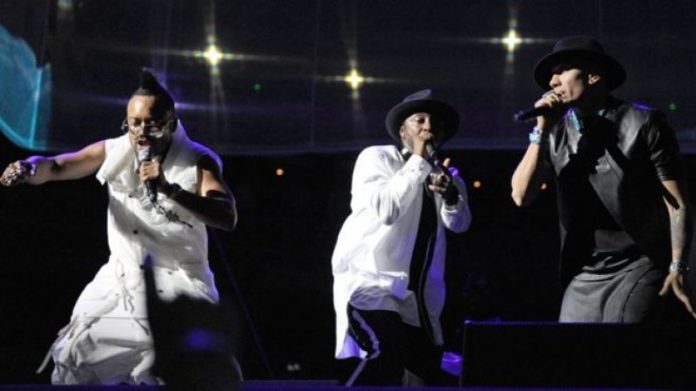 Led by will.i.am, the band played hits including Where Is The Love and I Gotta Feeling for an audience of 10,000 fans. But singer Fergie was not part of the line-up – with her parts sung by Lydia Lucy, who Will mentored on The Voice.

The star said the band would continue to work together, calling rappers Apl and Taboo “my best friends”.

“This feels really good to be here, with the people who were the seed of everything,” he added.

“We’ve been coming to the UK since 1999, and we used to play a place called the Jazz cafe,” said Taboo. “The UK has always been supportive of our band.”

Fergie’s non-attendance will fuel rumours that she has left the Black Eyed Peas permanently.

She was also missing from a one-off track, Yesterday, which the hip-hop band released last year to mark their 20th anniversary; and is due to appear solo at the Wireless festival this summer.

Speaking to BBC 1 Xtra on Thursday morning, will.i.am was cagey about the band’s current line-up.

“Right now, everyone is on their individual tip and I’m trying to build the new vehicle in which the Black Eyed Peas takes form.”

But he confirmed there was new material “coming this year”.
Lavish show

The reunion came as part of a will.i.am solo show, staged to promote his latest venture into the tech industry – a smart watch called dial.

But the music and technology did not make comfortable bedfellows.

In one of the strangest concert performances in recent memory, the rapper used the device’s fitness tracker to display the calories he was burning on stage; and made a clumsy attempt to phone his mother – who seemed bewildered by the experience.

At one point, the star even duetted with the watch’s voice assistant, who replaced Britney Spears on the song Scream and Shout – only for the video display to lose sync with the song and display the lyrics at random.

Will.i.am was more convincing as an advocate of tech education, imploring parents in the audience to make their children learn code, saying it was as important as studying a language.

“Five years ago, I decided I want to build artificial intelligence,” he said. “That’s a crazy thing for a person from the projects to dream of. But here I am.”

The lavish show, performed in the round at one of London’s most iconic venues, also featured a number of surprise guests.

Cameos were made by Tinie Tempah, performing his hit single Girls Like; Ricky Wilson of the Kaiser Chiefs, playing I Predict A Riot; and British R&B trio WSTRN, whose single In2 was one of last year’s breakout hits.

But will.i.am reserved the most praise for Lydia Lucy, who was a finalist in this year’s series of The Voice UK.

The star said “it broke my heart” when the 22-year-old, who was part of his team, came third in the contest.

“She should have won,” he said, before telling the singer he had “a gut feeling” she would have an “international career”.

He then likened her current situation to his early, pre-fame years in the Black Eyed Peas.

“There was a point of time in my career [when] no one believed in us. We got turned down so many times. It was heartbreaking. But you have to have courage. You have to know the difference between those who care and those who aren’t paying attention.”

Lucy was then invited to perform Fergie’s vocal lines from the Black Eyed Peas’ biggest hits.

However, a spokesperson for the band told the BBC she would not become a permanent part of the line-up.

Black Eyed Peas is bouncing back with new force in 2015

2014 AMAs Will Be Rocked By Fergie, Lorde and One Direction

Being A Mother Is A Trying Job-Fergie

Fergie’s Baby Poo On Her Husband

Josh Duhamel is relieved Fergie is expecting a baby boy.

Fergie To Make ?100K-A-Day As The New Ambassador For Man United