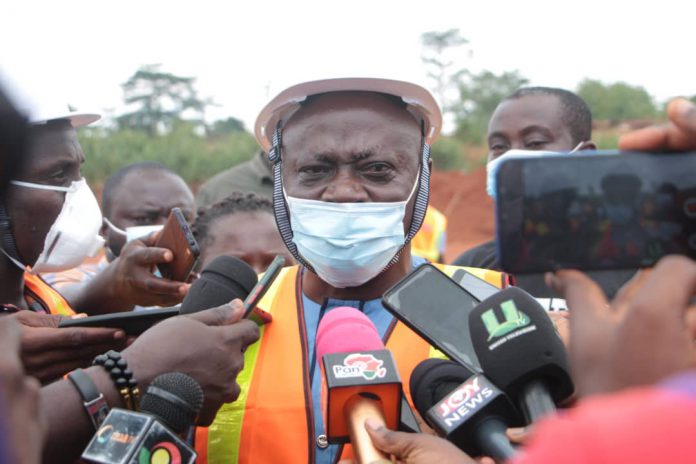 The Ahafo Regional Minister, Mr. George Boakye has stated that the Integrated Recycling and Composting Plant (IRECOP) being constructed in the region by Zoomlion Ghana Limited (ZGL) will provide enough fertilizer for the region.

He said the region is a food basket of the country and that with the siting of the project in the region would make the region a hub for fertilizer production and by extension massive food production.

The Regional Minister made the statement on Friday  at Goaso in the Ahafo region when Parliamentary Select Committees on Local Government, Science Environment and Technology, Finance and Works and Housing who were on a working visit to inspect works on the IRECOP project, paid a courtesy call on the Regional Co-ordinating Council.

“Ahafo is a farming community and we rely on Accra and Kumasi for fertilizer but with this project fertilizer will be in abundance and help food production in the region”, Mr. Boakye emphasized.

The former law maker also indicated that apart from the agricultural benefits that the region stands to benefit from the project, the project will also create direct and indirect jobs to the teeming youth in the area.

The Regional Minister therefore appealed to the Contractor to speed up with the work adding that “this project is very dear to my heart and that of the region”.

The Chairman of the Select Committee on Local Government Hon. Emmanuel Gyamfi who doubles as the leader of delegation thanked the Regional Minister for the warm reception and expressed his optimism that the next time they visit the Co-ordinating Council , they would be received in the new Office Complex  of the Council which he said is 90% complete.

The Ahafo region is one of the new regions created and its Co-ordinating Council currently operates in a make shift office Complex hence the statement by the leader of the delegation.

The Law Makers later visited the project site where two Members of the Select Committees Hon. Ibrahim Banda and Hon. Carlos Ahenkorah praised Zoomlion for the project and expressed the need for government to support the company.

“We as a Committee think it is the best thing to happen to this country so government will support them”, Hon. Ahenkorah said.

On his part, the Ahafo Regional Manager for Zoomlion Edward Ziddah disclosed that the project, consisting of recycling, landfill, and medical waste and residual waste management, when completed will process 289 tons of daily waste within the Asutifi North, Asutifi South Districts and the adjoining communities.

He gave the assurance that the project will be completed on schedule citing July as the completion date adding that electricity has been connected to the project site “now what is left is the Steel from SIVOCO for the structural works”.