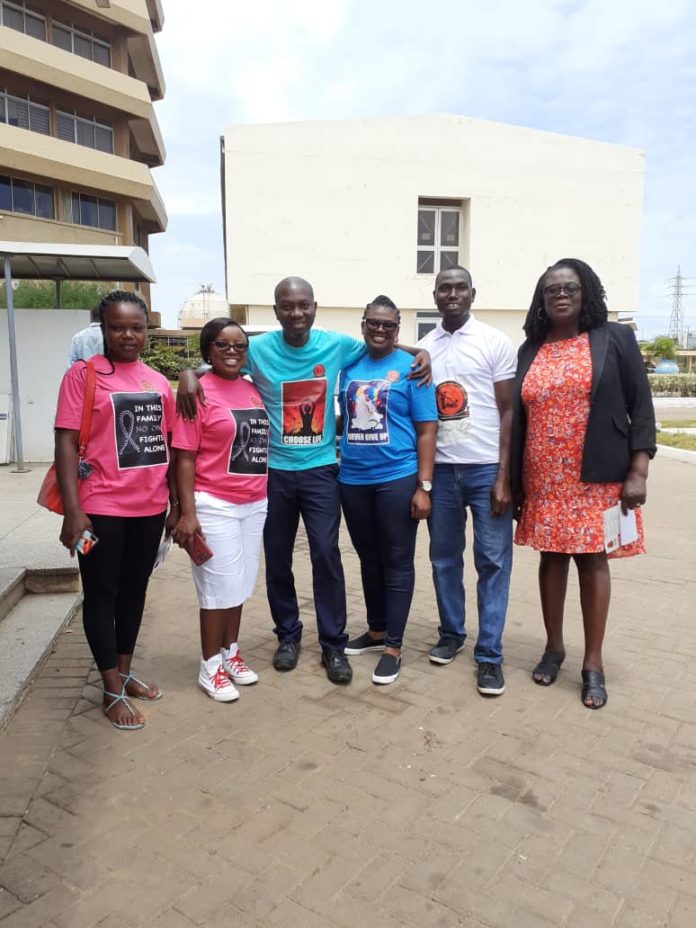 Favor Foundation for Life (FFL), a Non-Governmental Organization (NGO) which advocates on Mental Health and Suicide Prevention has petitioned the president of the Republic of Ghana, H.E Nana Addo Dankwa Akufo-Addo to as a matter of urgency pardon prisoners convicted for attempted suicide.

The foundation is calling on president Akufo Addo to consider such persons when exercising his prerogative of mercies enshrined in article 72(1)(a-d) of the 1992 constitution of the republic of Ghana. “The president of the republic ,may, acting in consultation with the council of state,decide to exercise the prerogative of mercy or just grant amnesty of convicted people’’.

This constitutional provision is a special gesture the president grants people convicted of various crimes on humanitarian grounds or for reconciliatory purposes.

Ghana joined the rest of the world on September 10th to mark the Word Prevention Suicide Day under the theme ’’Working together to prevent suicide’’. According to the World Health Organization (WHO) in every forty (40) seconds, someone loses their life to suicide. This implies that eight hundred thousand (800,000) people loose their life to suicide annually.

Speaking to journalist in a program by FFL for staff of Tema Oil Refinery(TOR),the Founder and National Director of FFL, Mrs. Favor Hilda Apini Brown expressed worry over why attempted suicide should be a criminal offence. She appealed to parliament to decriminalize attempted suicide because people who attempt suicide need help and not jail.

‘’We are appealing to parliament to decriminalize attempted suicide now! already the victim is going through a difficult situation and the country should be ready with interventions to help such people and not conviction, I think a better solution for now is to refer people with suicidal ideation to the psychiatric hospital for professional help’’, She stated.

Some of the inscriptions on placards read, Mr. President kindly pardon victims convicted of attempted suicide, Parliament please decriminalize attempted suicide now, people who attempt suicide need help and not jail and many others.

FFL, is Collating one million signatures of persons appealing to parliament to annul the CRIMINAL OFFENCES ACT – 1960(29) Section – 57 of the criminal act which criminalizes attempted suicide.

The Occupational Specialist for Health and Safety at TOR, Dr. Lord Kwame Arhinkorah, appealed to the various heads of organization to provide regular mental check-ups for their staff. He said the annual Chief Psychiatric report indicates that a lot of people need mental examination.

“When you carefully study the annual report of the chief psychiatric you will realize that, a lot of people out there needs to be medically examined, I agree with FFL that convicting people for attempted suicide for attempted murder is not the best solution, Government needs to find a better option of dealing with such challenges’’ he advised.

On her part,the Human Resource Manager of TOR, Mrs Abigail Ahulu, appealed to the government to critically examine the concerns raised by FFL to seek the welfare of persons with mental challenges and suicidal ideation to help them live more fulfilling lives.

The union chairman for the senior staff union, Bright Adongo also added his voice to the appeal for the repeal of the law that criminalizes suicide in Ghana.

The Project Coordinator for FFL, Mrs Joyce Odoom Asare, appealed to corporate organizations and philanthropist to assist them with funding to organize mental health awareness programs in schools.

She said the numerous call they received daily from people who seek for counseling demands that more work is done to build a more resilient society in Ghana. She said the foundation needs assistance to secure offices in all the regions Ghana to help save more lives.

Some of the Staff of TOR and members of the foundation pledged their continuous support to FFL to ensure that people who attempt with suicidal ideation are giving the necessary help and treatment.