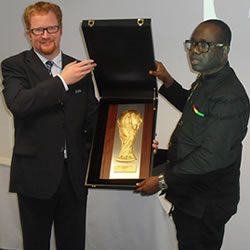 FIFA welcomed the Ghana delegation to the World Cup after the Black Stars landed in Brazil, Wednesday night for the 20th edition of the tournament.

Led by Ghana Football Association President, Kwesi Nyantakyi, the Black Stars, who flew into Salvador from Washington on the eve of the tournament have settled in at their base in Maceio in the north-east.

Ghana, the last team to reach Brazil were presented with welcome plaque by FIFA as their arrival meant that all 32 participating teams are in Brazil ahead of the World Cup.

The Black Stars will train at the Estadio Rei Pele on Thursday.

Ghana will open their campaign in the tournament against the US on 16 June at Estadio das Dunas in Natal.

The Black Stars will face Germany on the 21 June at the Estadio Castelao in Fortaleza, and close their Group G campaign at the Estadio Nacional against Portugal on 26 June in Brasilia.