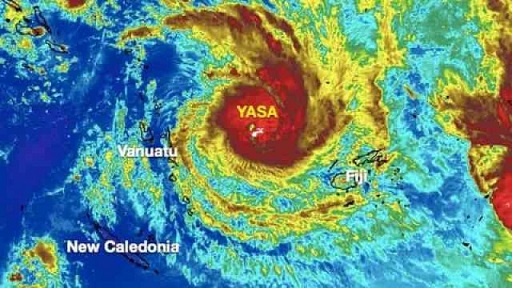 Fiji declared a national emergency Thursday as Cyclone Yasa struck the islands with expected winds up to 260 kilometres per hour and waves up to 16 metres.

The category 5 cyclone is expected to pass over the main islands Thursday night.

The government warned people to move to high ground and stay inside to avoid flying debris, Fiji media reported.
The government imposed a national curfew for Thursday night and declared a state of natural disaster for the next 30 days giving police and authorities power to coordinate response to the expected damage.

Prime Minister Frank Bainimarama tweeted 850,000 Fijians are in the direct path of what is the world’s strongest storm.

“Prepare, take cover, and pray for Fiji,” he tweeted. He said on this same day in 2012, Fiji was enduring Cyclone Evan.

“Since then, we’ve been battered by 12 more cyclones — two of which (Winston and Yasa) are now jockeying for our hemisphere’s strongest-ever storm in history. This is not normal. This is a climate emergency.”