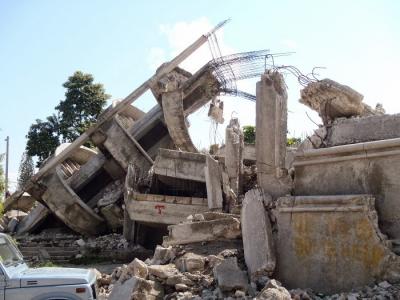 By JUDITH FRANK EDET
It?s been confirmed that Imo state film academy which is headed by actress Nkiru Silvanus and was commission some days ago by  governor Rochas Okorocha has collapsed.
Reports have it that the building  collapsed as a result of substandard material, however the state commissioner for Information, Engr. Chidi Ibe confirmed  the incidentbut said  it was as a result of an accident. According to him;
?There was nothing like collapsed building. It was a trailer carrying a heavy generator and while trying to drop the equipment behind the Film Academy, one of the trailer?s tyres pulled and the trailer fell on the building. The impact of the trailer?s fall led to the collapse of the building,?
According to reports by the National Gazette “Workers and eye witnesses at the complex told our correspondent that they came to work on Monday morning to find the edifice completely razed to the ground.”
No life was lost but we hope that it didn?t collapse as a result of substandard materials because it would a thing of shame for the Imo state government and they pumped in lots of money into it. Governor Okorocha   donated N100million to the academy on the day of the commissioning.