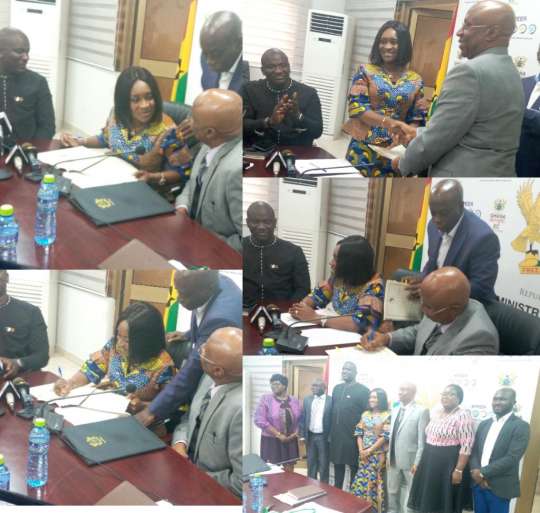 The Ministry of Finance, on Wednesday, signed a loan agreement of $81.67 million with the African Development Bank (AfDB) to roll out the first phase of the Eastern Corridor Road Development Programme.

The Programme covers the construction of the Dufor-Asikuma Junction road (39.2km), Asutuare-Aveyime (23.9km) road and two interchanges at Dufor Adidome and Asikuma Junction.

Mrs Abena Osei-Asare, a Deputy Minister of Finance, who signed the agreement on behalf of the Minister, said the Government was also operationalising a number of ancillary works to address the immediate needs of the communities located along the project corridor.

Such ancillary works include developing the skills of selected youth and women in masonry, steel fixing, and auto mechanics, among others, to enhance their employability and entrepreneurship abilities.

The project seeks to provide beneficiaries with facilities for the production of livestock, processing of fish, cassava, cereals and fruits.

It would also see the rehabilitation and improvement of existing facilities, such as 15 basic schools, six health posts, while two markets and two multi-functional centres would be built.

Additionally, Custom Service Officials would be trained on transit procedures and regulations.

There would be monitoring of transit traffic along the corridor and the establishment of an inter-agency coordination platform to address bottlenecks along the entire trade corridor.

Mrs Osei-Asare said the initiatives fed into the Infrastructure for Poverty Eradication Programme, which sought to promote inclusive development as part of the Government’s larger strategy for delivering excellent road network.

Consequently, it would serve as a catalyst for regional integration and contribute to the overall growth of the economy by specifically reducing road accidents, improving basic social service delivery and increasing the production of value added agricultural products for exports.

Dr Sebastian Okeke, the Country Director of AfDB, said the Bank was enthusiastic about promoting infrastructural development, especially when it led to regional corridors.

Since 1981, he said, it had financed 12 road projects, including six road studies and one multinational project; in addition to supplementary loans totalling about $518 million.
The support for the implementation of the Eastern Corridor programme was to achieve the global objective of contributing to efficient multimodal transportation system, he explained.

“This would promote Ghana’s ports and corridors to enhance inclusiveness that would stimulate socio-economic development and facilitate domestic and regional trade and integration,” Dr Okeke said.

“We, at the Bank, acknowledge the dynamic partnership with the Japan International Corporation Agency and the OPEC Fund for International Development in financing this project and the interventions on this corridor”.

However, he remarked: “As we sign this loan agreement today to signify the commencement of implementation, we realise that there is still so much more to be done to make sure issues like cost overruns, insufficient designs, and so on, are eradicated from this transport project”.

Mr Anthony Abayifaa Karbo, a Deputy Minister of Roads and Highways, said his Ministry was ready to mobilise both internal and external resources to promote development.

The long term plan of the road sector for its corridors, he said, was to develop them into high-speed dual roads to enhance movement and ensure safety.

The sector, he said, intended to complete the project within 24 months and construct a new bridge over the Volta River at Volivo.

He explained that the Eastern corridor, located to the East of the country, and approximately 695km in total length, connected the port of Tema to Kulungugu (border town with Burkina Faso) in the innermost part of the country.

Though the corridor was about 200km shorter than the Central corridor, Mr Karbo said, it had experienced a significant amount of deterioration, making travelling difficult.

adb to collaborate with Development Bank on its agribusiness financing agenda