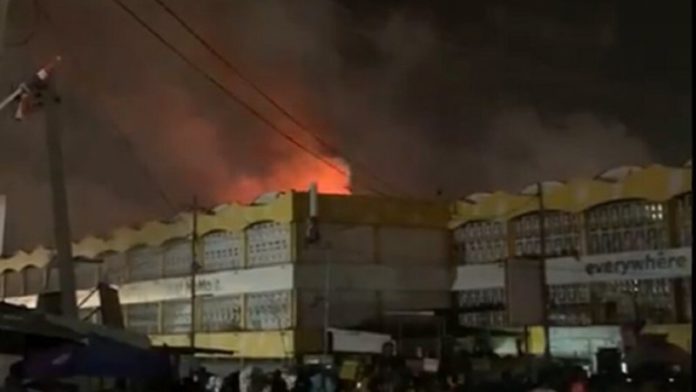 Fire on Saturday night burnt down 12 fabric shops at the Kaneshie Market in the night at about 2300 hours.

Security personnel suspect electrical fault to be the cause of the fire as smoke was seen coming out from the fuse box in front of one of the affected shops.

Deputy Superintendent of Police (DSP) Effia Tenge, Head of Public Affairs Unit of the Accra Regional Police Command told the media that the cost of the items the fire destroyed was not readily available, adding that no casualty was also recorded.

DSP Tenge said on Saturday December 19, 2020 at about 2300 hours, Police received information that there was a fire outbreak at the second floor at the Kaneshie market complex.

She said Police proceeded to the scene, secured the place and information was relayed to the Ghana National Fire service.

“All Patrol vehicles within Kaneshie Division including; Kaneshie Motor bikes and that of Odorkor were called to the scene to cordon off the scene. Meanwhile the security personnel of the market and some Police Personnel from Kaneshie Barracks started fighting the fire with the fire extinguishers placed at vantage points at the market.

“At about 2330hours, DO1 Pobee from the Operations outfit of the Ghana National Fire Service, deployed about 15 Firemen on board three Fire tenders from Dansoman and the Regional Fire Service to the scene,” she said.
DSP Tenge said at about 0000hours of Sunday, December 20, 2020 the fire was brought under control.

“Meanwhile, the immediate cause of fire from the first security man of the market who detected the fire is suspected to be electrical as he saw smoke from the fuse box in front of one of the burnt shops in course of their routine rounds.”

She said “Also DO1 Pobee informed the police that, the Fire Service will submit a detailed report on completion of their investigation,”

IMF disburses US$447 million loan to Kenya for budget support