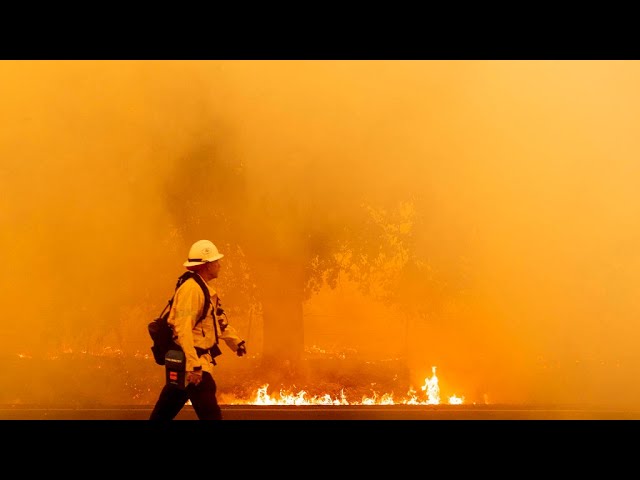 Two wind-driven fires that forced nearly 100,000 people to evacuate in Orange County continued to burn Wednesday, raining smoke and ash on many parts of Southern California.

The fierce Santa Ana winds that fueled the blazes eased significantly Tuesday, and firefighters were starting to gain the upper hand after two days of pitched battle defending subdivisions from Yorba Linda to Lake Forest.

Together, the Silverado and Blue Ridge fires have consumed more than 27,000 acres, but destruction to property has been relatively light. Officials initially said 10 homes were damaged in the Yorba Linda area but later downgraded that number to eight.

All of the massive evacuations in Irvine have been lifted, and by late Wednesday afternoon all evacuations were lifted in Yorba Linda. Evacuation orders for several canyon areas and parts of Lake Forest were still in place for the Silverado fire.

By Wednesday morning, crews were optimistic as containment expanded to 16 per cent on the Blue Ridge fire and 25 per cent on the Silverado fire, said Captain Jason Fairchild of the Orange County Fire Authority.

Fairchild attributed the gains to improvements in the weather, including increased humidity and slowing winds.
“We had very favorable weather overnight, and we were able to get a lot more crews out and around the fire,” Fairchild said. “It’s going to be a good day for us, I think.”

Still of concern are two gravely injured firefighters, ages 26 and 31, who were placed on ventilators after suffering second- and third-degree burns over half their bodies while battling the blazes. They remain in critical condition, Fairchild said.

Orange County residents, too, are on edge as more than 1,300 firefighters hustle to keep control of the flames.
“It’s a risk whenever you move near these hills,” said Mission Viejo resident Marc Church.

Church, 63, moved to the area only a year and a half ago because his wife wanted to be closer to the hills. As he joined other passersby surveying the canyon where patches of charred black peeked through brown haze Tuesday, he said they feared the wind could carry burning embers that would ignite their backyard.

The family had packed a few boxes of important documents — car titles, birth certificates, bank information — and spent the morning gathering other necessities, including clothes, computers and chargers.

They took shifts sleeping and keeping watch overnight, he said, awakening to voluntary evacuations and the sound of helicopters circling.

Even people who live far from the flames felt the effects of the Santa Ana wind storm, which saw gusts topping 90 mph Monday.

Winds carried ash and soot coating the ground from the Bobcat fire earlier this month back into the skies, choking Southern California with air so bad it ranked the worst in the nation.

“Smoke impacts in the South Coast Air Basin will likely continue until fire activity decreases for the Blue Ridge and Silverado Fires,” the advisory said.

And the battle is far from over: Fairchild said although the fires are separated by a mountain range, the smoke from each blaze can be seen from the other.

“We’re supposed to get some light winds today, and in the wrong circumstances, light winds can still push fire pretty good,” he said.

Governor Gavin Newsom on Tuesday said California had received a grant from the Federal Emergency Management Agency allowing 75 per cent reimbursements for fighting the Silverado and Blue Ridge fires.

California is experiencing its worst fire season on record, with the Orange County fires much smaller than many other blazes.

“We talk in historic terms,” Newsom said, “and I remind you that six of the top 20 wildfires in our state’s history have occurred in 2020.”

More than 4 million acres have burned this year, and wildfires across the state have resulted in at least 30 fatalities, he said.