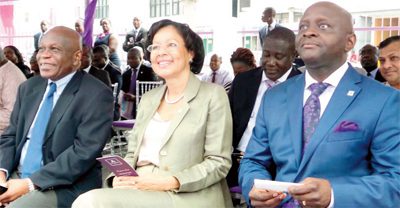 (From right to left) Gabriel Edgal, Karen Akiwumi Tanoh, and Mr Amakye at the launch of the Airport branch recently

According to him, First Atlantic Bank was already forming strategic alliances with partners within the region and internationally to help actualise such objective.

Mr Edgal, who was speaking at the recent launch of the bank?s ultra-modern Airport branch in Accra, mentioned that ?First Atlantic Bank shall act as a conduit for the inflow of investments, remittances and the required capital into the country and we are going out there to look for businesses and countries that have surplus, and we will channel it into Ghana, as our contribution to the much needed capital for development.?

Executive Director of First Atlantic Bank, Daniel W. Addo, in a speech, announced that the bank had started an aggressive expansion measure.

Originally founded as a merchant bank, First Atlantic Bank is a full-scale universal bank with about 20 years experience in the Ghanaian market.

Karen Akiwumi Tanoh, board chairperson of First Atlantic Bank, said the bank had re-invented itself in keeping with the increasing demands of its esteemed customers.

She noted that the bank?s roll-out project was testimony of its strong belief in the resilience of the Ghanaian economy and its long-term prospects.

She therefore called on the unbanked to choose First Atlantic for a wonderful banking experience.