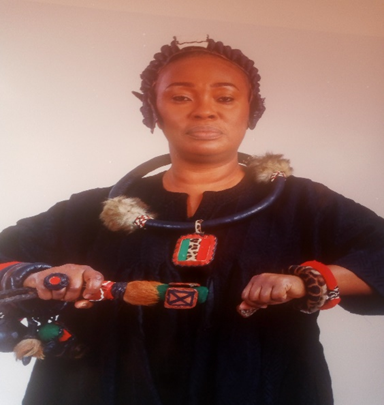 Madam Diana Afua Asantewaa, a 60-year-old businesswoman had been enstooled as the Adontenhene of Kwahu- Mpraeso in the Kwahu Traditional area under the stool name, Nana Krobea Asante.

The new Female Chief swore the oath of allegiance to Nana Ampadu Daduam II, Chief of Kwahu- Mpraeso, elders and the community at Kwahu Mprso in the Eastern Region.

Introducing the new Chief to the Mpraeso community at a durbar, Nana Abra Appiah, the Krontihene of Kwahu- Mpraeso who spoke on behalf of Nana Daduam II congratulated Nana Krobea Asante for accepting the position offered her by the chief and elders.

He said the Adontenhene stool never existed in the Mpraeso community for ages but the chiefs and elders saw the need to appoint a rightful royal to occupy it to strengthen tradition rule in the area.

He urged the citizens of Mpraeso to support their new chief.

Delivering a brief address at the ceremony, Nana Krobea Asante thanked the elders for honouring her with such a position.

She appealed to the community and the chiefs to support her to be able to deliver on her mandate.

The new chief promised to construct an ultra-modern Old Peoples Home in the community to house the aged who have been abandoned by their families.

Nana Krobea Asante said she would engage medical doctors and caretakers and also provide recreational items to enable the aged to feel that they are part of the society.

Nana Krobea Asante expressed concern about the neglect and bad treatment of the aged.

She urged the youth in the area to go to school and aspire to reach the tertiary level of their education.

Nana Krobea Asante promised to work closely with the Mpraesomankuo, a benevolent society, to promote education, sporting activities, and other social activities that would lift the image of Mpraeso to a befitting status.

Nana Krobea Asante appealed to parents and guardians to take a keen interest in the education of the girl child to enable them to occupy higher positions in society in the future .

She advised the youth to respect the elderly and avoid activities that could destroy their future.