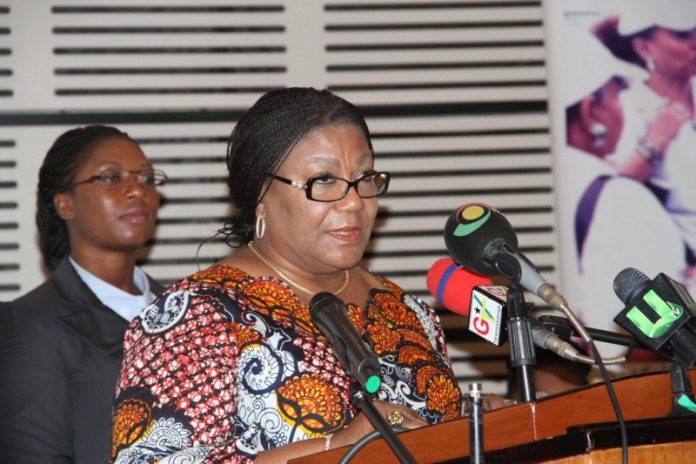 First Lady Mrs Rebecca Akufo-Addo has urged Ghanaians to continue to be patient with the Government as it works to make Ghana a more prosperous nation for all.

Citing the free Senior High School Policy, being rolled out by the Government this September as one of the good things for the nation, Mrs Akufo-Addo said the President, Nana Addo Dankwa Akufo-Addo had good plans for Ghanaians, therefore, he should be given some time to do his best.

“The President wishes good for the country so we should be patient with him and support him to succeed,” the First Lady pleaded.

Mrs Akufo-Addo made the appeal when she interacted with the Chiefs and Elders of Abamkrom and Kumikrom in the Upper West Akim District of the Eastern Region, on Wednesday, in Accra.

The delegation, which was led by Nana Abam V, Chief of Abamkrom, the Queenmother of Abamkrom, Nana Ama Amafoa and Mr Eugene Sackey, District Chief Executive of Upper West Akim District, visited the First Lady to thank her for supporting the District with some developmental projects.

They particularly, commended Mrs Akufo-Addo for rehabilitating the Abam Health Centre, which was in a very dilapidated state, in 2016, thus, making most sick people in Abamkrom travelling long distances to seek health care elsewhere.

Mr Samson A. K. Akyeh, a Principal Elder of Abamkrom, on behalf of the people and Chiefs, expressed appreciation to the First Lady for redeeming the promise she made to Abamkrom during her 2016 Election Campaign tour.

He said: “The Clinic was rehabilitated for the first time by the First Lady”.

He, however, appealed to the First Lady to assist the people to build a nurses’ quarters for the nurses at the health Centre.

He also appealed for the roads in the area to be rehabilitated because they were in a deplorable state, especially, the 10.5 kilometer Nyanoa through the Abakrom to Esaaso road.

Mr Sackey, on behalf of the Assembly, chiefs and people of the town, also made a request for the completion of a surgical theater at Adieso Health Centre to help cater for the many cases of pregnant women who were mostly referred to far away distance hospitals due to complications.

“Some of these referrals end up with complications to the mother and the baby and sometimes death of the newborn baby due to factors such as delay in transporting the patients to receiving points due to lack of ambulance service in district,” Mr Sackey said.

He also requested for a district library and a Magistrate’s Court for the Upper West Akim District, which was recently established as a new district.

Nana Ama Amafoa, the Queenmother, appealed to the First Lady to assist in the mobilisation of women in the communities so they could be resourced and make their livelihoods, which were mainly farming, gari and palm oil making, more viable.

Mrs Akufo-Addo said assured the people that their requests would be considered as the Government endeavoured to address most of the challenges confronting the people.