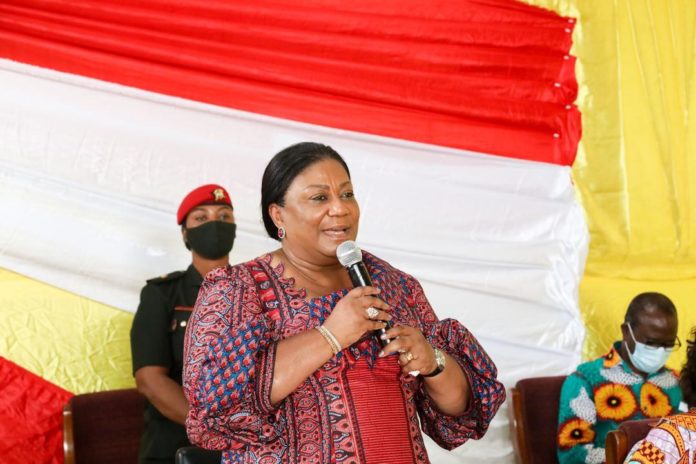 The First Lady, Mrs Rebecca Akufo-Addo has cut the sod for the construction of a new children’s library at Bortianor in the Ga South Municipal Assembly.

The 40-seater library, expected to be equipped with computers, is being funded by the Rebecca Foundation and would serve as a knowledge acquisition place for children around the Bortianor area.

It would also help the children to gain the confidence to succeed in life, the First Lady said.

“I hope this community will encourage children to make full use of this library when it is completed in November this year, and God willing I will be back to commission it,” Mrs Akufo-Addo stated.

She said since 2017, the Rebecca Foundation had supported and invested in the education of school children, especially girls.

The Foundation has also provided mentoring, skills training and financial support to those who drop out of school and were unable to continue.

“Very soon, this mentoring programme will be telecast on television to make it more accessible to girls across the nation,” she said.

Mrs Akufo-Addo said so far four libraries had been built in the Upper West, Bono, and the Western North Regions to provide access to books and computers for Ghanaian children.

She said two more libraries were currently being constructed in the Oti and Ashanti Regions.

Mr Henry Ayetse, the Municipal Director of Education, said available statistics showed that most children were unable to read after six years of primary education.

Also, only a few schools have proper functional libraries, he said and lauded the First Lady for providing such facilities to augment the Ghana Education Service’s work in ensuring children’s access to books.

Mr Slyvester Tetteh, the NPP Parliamentary aspirant for Ga South, urged the chiefs and people to give the government and the party another chance in the December polls so they could continue to develop the country.