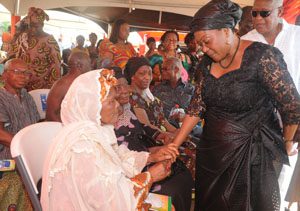 First Lady in a farewell handshake with Hajia Amina Salley

First Lady Lordina Mahama last Sunday mourned the death of the late Hajia Adiza Salley with the family and well wishers at the family home at Ablenkpe, Accra.

The family used the occasion to express their profound gratitude to the First Lady and the President for the support they received from the first family right from transporting the deceased?s body to Accra, to burial and memorial services.

The one-week funeral ceremony was marked with Quran recitation and glowing tributes from the family, the widower, the National and regional NDC party executives, the Accra Metropolitan Assembly of which she was a member and the regional women?s wing of the New Patriotic Party (NPP).

The NPP delegation was led by Boakye Ajarko and the Greater Accra Regional women organiser of the party, Joyce Konokie Zempare.

In a tribute, the women?s organiser recounted her encounters with Hajia Adiza at various political platforms, saying she never discriminated against other party members and was always full of smiles.

Hajia Adiza Salley died in a car accident whilst returning to Accra after attending the funeral of the late sister of the First Lady, Mrs Mercy Yaa Ankomah, in Kintampo on 26th April 2014.

The injured are currently on admission at the 37 Military Hospital.

Yango driver saves the day and a life