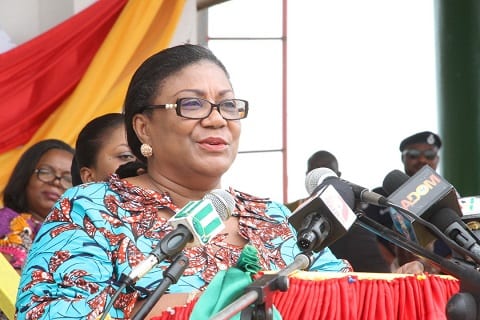 An initiative of the National Board for Small Scale Industries (NBSSI) and MasterCard Foundation, the project would over a three-year period, create 39,000 jobs, for the youth, in Micro, Small and Medium Enterprises (MSMEs),70 per cent of which would be women.

It would target graduate youth, out of school youth, school dropouts, and women-owned led micro, small and medium enterprises.

Speaking at the launch, held in Accra on the theme: “Creating Dignified and Sustainable Work for Ghana’s Young Men and Women”, Mrs. Akufo-Addo expressed her happiness over the initiative, saying it aligned with President Akufo-Addo’s Ghana Beyond Aid agenda, which also sought to provide well dignified jobs for the youth.

She said since the assumption of office, President Akufo-Addo had launched a number of initiatives including the Nation Builders Corps (NABCO) and the National Entrepreneurship and Innovation Programme to create the platform for training and work experience acquisition for the youth as well as provided integrated support including funding, for start-ups and young businesses.

Despite these initiatives by government, Mrs. Akufo-Addo said youth unemployment still persisted, hovering around 13 per cent by end of 2019, as recorded by the International Labour Organization (ILO), “a situation, which calls for strategic measures and policies that take into consideration youth development and integration”.

She said youth unemployment had the potential to create serious social consequences and could lead to social exclusion and unrest.

The situation, she said, therefore, called for the private sector and other bodies to partner government to support youth employment and entrepreneurship.

To this end, Mrs. Akufo-Addo said as part of the Rebecca Foundation’s women’s empowerment initiative, called Terema, her Foundation partnered with NBSSI to train some young women in various skills and used the occasion to present sewing machines to a batch of young women who recently completed their training.

She said the Foundation would continue to train and provide more women with start-up kits and other equipment to start their own businesses.

The First Lady also called on traditional, religious and community leaders to rally behind the NBSSI/Mastercard Foundation initiative, to enable the youth to boldly step into the new future, where their individual and collective contribution will transform Ghana.

Similarly, the tenets of the project offer work in financial, education and skill training as well as digital and economic transformation.

Mr Ishmael Ashitey, Greater Accra Regional Minister, said the initiative would go a long way to complement Government’s efforts to create an enabling environment to build the capacity of the youth, especially, women to take on more active roles in the country’s future.

“It is in the light of this that I feel very excited to know that, the Young Africa Works Project will be implemented in all 16 Regions of Ghana”.

He said to help shape the youth for the challenges of the upcoming decade, a National Youth Policy had been designed by the Government to provide quality education, entrepreneurship, job skills, creative skills, sports and develop leadership.