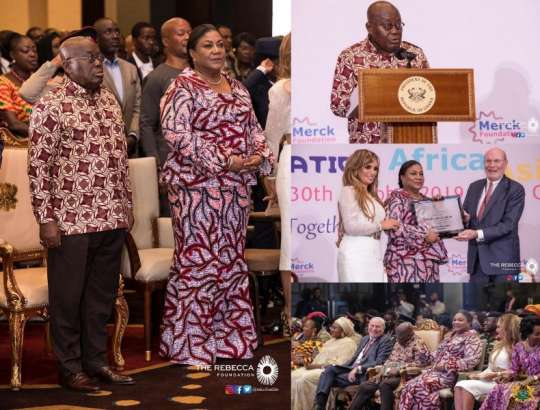 First Lady, Mrs Rebecca Akufo-Addo has welcomed her counterpart African First Ladies to the 6th Merck Africa and Asia, Luminary Conference in Accra, and urged them to continue to work hard to break the stigma being suffered by infertile couples.

She said the acceptance and involvement of African first ladies in the Merck Foundation’s health programmes and activities was a way to help address infertility in Africa.

“This is a movement of empathy, respect, empowerment and recognition. I and my sister first ladies are truly proud to be part of this movement”, she proudly said at the opening of the conference which also coincided with the second anniversary celebration of the establishment of Merck Foundation.

The two-day conference, which on Tuesday was being held on the theme: “Together we make a Difference”.

It is being attended by over 1,000 participants, made up of First ladies from Malawi, Liberia, Sierra Leone, Nigeria, Zambia, Zimbabwe, Chad, Burundi and Central African Republic, as well as other Health, Gender, Education and Information Ministers of States and other health professionals and stakeholders.

Participants would among others, deliberate extensively on infertility, to identify avenues of changing mind-sets towards perceived infertile couples and resourcing further research to build fertility care capacity in Africa and developing countries.

According to Mrs Akufo-Addo, for five years the Merck Luminary had provided the platform for brilliant, engaging scientific discussions that had raised awareness and collaboration around Diabetes, Fertility, Oncology and other health issues.

She also expressed happiness that the Merck Africa Asia Luminary, was gradually becoming an important event on the global scientific calendar, helping to find solutions to the many illnesses plaguing society, especially in Africa.

She admonished society against mocking and stigmatizing perceived infertile couples, and rather, empathize with them and influence national policies on enhancing fertility care.

She was optimistic that after five years of providing the platform for brilliant, scientific engagement and awareness creation around Diabetes, Fertility, Oncology and other health issues, the 6th edition of the Merck Luminary would end with the formulation and planned implementation of programmes that would address the challenges of infertility.

Later in a panel discussion, the first ladies indicated what each of them was doing in their respective countries, which included, advocacy, women empowerment, building health facilities for the treatment of infertility among couples and campaigning against stigmatisation of infertile couples.

Many of them were also working with other collaborators to manage cancer, diabetes, hypertension and in the capacity building of health professionals together with Merck Foundation.

President Nana Addo Dankwa Akufo-Addo, opened the conference, and together with the first lady, rallied support for infertile couple.