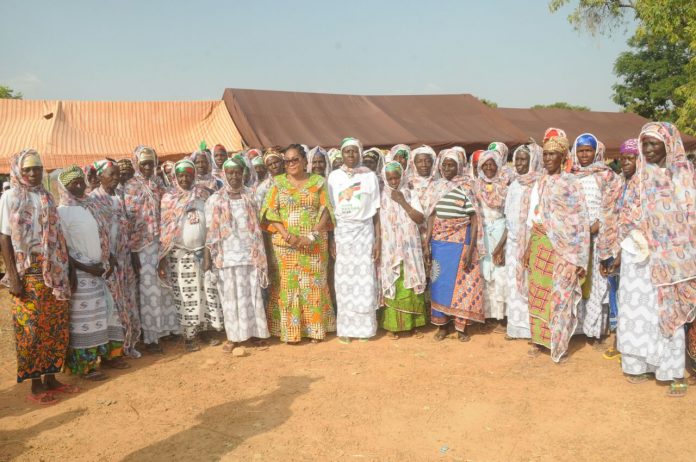 “It is about time we stopped discrimination against women, especially the elderly ones and rather show them love during their old age. They need our care, support and love more than ever at this stage of their lives” Mrs Mahama said when she interacted with the inmates of the Gambaga Witches Camp in the Northern Region.

“It is my belief that everybody especially the less privileged women in society have the right to live a normal life and also be given the opportunity to become responsible in society just like any other person”, she said.

The First Lady went to visit the inmates as part of her recent tour to parts of the Northern and Brong Ahafo Regions where she presented assorted items, equipment and medical supplies to various hospitals, institutions and children’s homes.

She donated assorted items to the inmates at the Camp to help in their upkeep and paid homage to the late Madam Tachira Mutara, former Magazia (Leader) of the camp who passed away in May after a short illness.

She described Madam Mutara as a peace loving and dedicated leader who did all she could to ensure that residents of the camp lived peacefully with each other.

“She is not known to the rest of the world. She will not receive an award or honour, but for those of us who knew her and worked with her, this woman deserved a Nobel Prize”.

Mrs Mahama said she found it difficult to understand why women at their old age would be accused of witchcraft, neglected, excluded from their communities and thrown into a secluded camp.
“Have we ever, as Ghanaians sat down to think about the trauma they go through whiles in the camp? Have we considered their welfare and human rights, the right to live a dignified life? If we did, the world would be a better place for all irrespective of our social standing.”

She again questioned why it was only grandmothers who were often accused of witchcraft and not grandfathers, saying, “These are all old superstitions created to keep women down”.

Meanwhile, Mrs Mahama has pledged the Lordina Foundation’s commitment to continue to support and empower women irrespective of where they found themselves.

She urged people not to blame their grandmothers if they had not been successful in life.
“Blame yourself. Your lack of success or inability to gain something in life is not the making of any old lady or witchcraft. Look into yourself and continue praying to God”, she advised.
She urged movie directors to change their scripts which most often portrayed women as witches as this remains stuck in the minds of the people who watch such movies.

“I am looking forward to the day when society will stop accusing old women of witchcraft. I will be the happiest person in the world” the First Lady said.
She said to make life worth living for the aged and also recognizing the importance of empowering women, government through the Ministry of Gender and Social Protection, would continue to provide LEAP support for residents of the camp, the aged, state orphanages and leprosaria across the country.

She said the Ministry would also launch the National Gender Policy to mainstream Gender Equality and Women’s Empowerment into Ghana’s development efforts, as it has already launched the first Government Shelter for abused women and children, and provided free National Health Insurance Scheme registration for over 800 residents of witches’ camps.

She said the President remains committed to ensuring that women were empowered and partook in the decision making process in the country.

Mrs Mahama said her Foundation would continue to complement government efforts in ensuring that residents of the camp lived decent and dignified lives.

She said when the ongoing building project at the new camp in Gambaga, which would serve as accommodation and Vocational Training School for the inmates and their children, was finally completed; it would provide some comfort for the inmates who would be moved from their current dilapidated abode to the new camp.

Ms Ruth Aloriwer, Programme Officer of the Gambaga Witches Camp, said there were currently 106 inmates at the camp, all of whom are being taken care of through the benevolence of the First Lady and other Christian organisations as well as the Chief of Gambaga.

She said the ages of the inmates ranged from 40 and 80 years and they were also surviving through the making and selling of handicrafts like beads jewelry, bangles, and soap making, among others.

The 30-bedroom apartment being built for the inmates is expected to be completed in three months time.

Mr Abudulai Abubakar, Northern Regional Minister, said the gesture by the First Lady to the needy and vulnerable all over the country was in consonance with the democratic credentials of the National Democratic Congress.

“She has been carrying out this great gesture to better the lot of the people”, he said.