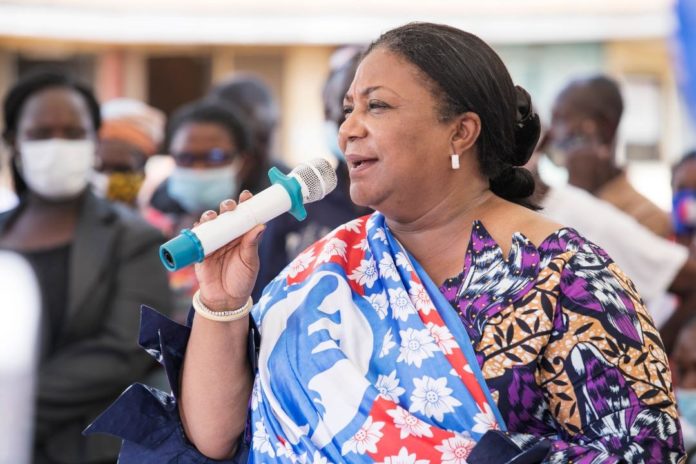 She interacted with trades at the Tuesday market near Mamprobi, and Chiefs and people of Chorkor, urging them to retain President Akufo-Addo and also vote for the NPP Parliamentary Candidate for Ablekuman South, Mr Bernard Nii Anyaa Brown.

Mrs Akufo-Addo appealed to Chorkor voters to look at the record of the NPP and the many good programmes like the Free Senior High School for all children, as well as the new system of granting loans to SHS leavers to access tertiary education.

She said President Akufo-Addo “holds Ghana in high esteem and believes in the prosperity of its citizens”, and so the need to give him another term for more development.

“My people, let’s all do well to vote to retain President Akufo-Addo for four more years to do more for us. We are moving forward and not backward,” the First Lady told the gathering.

She recounted the numerous initiatives, like the Planting for Food and Jobs programme, which had helped in addressing food shortages, the One Constituency, One Ambulance, One Village One Dam, and many more that were being rolled out, as unprecedented programmes.

She said the One District One Factory initiative, which was ongoing in many districts, was also providing jobs for the people, adding that the NABCO programme had put many youth into employment.

The First Lady assured the fisher folks around Chorkor that the issues of outboard motor shortages would be addressed shortly.

At the Tuesday Market, Mrs Akufo-Addo thanked the traders for supporting the NPP in the last elections, urging them to vote massively for the NPP in the December polls to consolidate the gains made so far.

She assured the traders that their new market complex would be completed soon, and urged them to ignore the rumour going round that the market was to be sold out for a Chinese entity.

Mr Anyaa Brown, the Parliamentary Candidate for the Area, appealed to the Constituents to vote for him as the Member of Parliament so that he could champion their cause.

Mr Jerry Ahmed Shaib, Chief Executive Officer Coastal Development Authority, said the government would continue to address fishery issues of the people including that of premix fuel issues and that landing beaches would be improved.