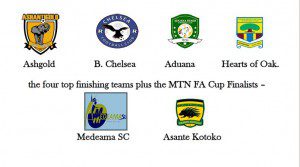 Enterprising local football statistician Nuhu Adams takes a look at the head-to-head meetings between the two side since Medeama joined the Ghana Premier League.

*Aduana Stars have managed only one win in their last eleven games against the Phobians.

*It took Aduana Stars almost six years to beat Hearts of Oak again after their 1-0 victory against the Phobians on 18th November, 2009.

*Hearts of Oak are without a win in their last five outings in the Western Region.

*The Hearts of Oak’s last match against a Brong Ahafo side at the Essipong Stadium ended in a 2-4 loss to Berekum Chelsea.

*Aduana Stars lost 2-0 in their only match played at Essipong Stadium last year.