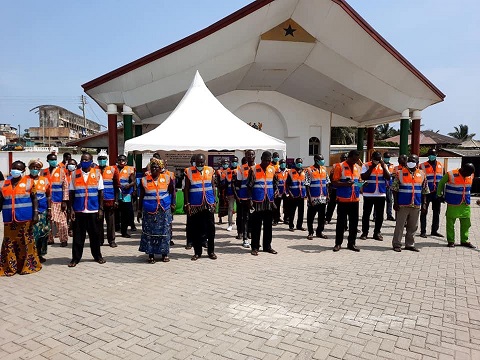 The move is part of efforts to enhance monitoring, control and surveillance of illegal activities on the shores of Ghana.

The committee is expected to augment effort by the Fisheries Commission in reducing the spate of illegal activities on sea and also device strategies of settling disputes among the fisher folks at the local level.

The LaBEC members were provided with visibility jackets to enhance their work and the animation, which showed the etiquettes of their work at the landing beaches.

In 2017, the Central Regional Directorate of the FC and the Ghana National Canoe Fishermen Council (GNCFC) discussed the establishment of Landing Beach Enforcement Committees to control illegal fishing among artisanal fishers.

In 2019, the programme was piloted in Elmina, Mumford and Nyanyaano with significant success.

During the last quarter of 2019, the ‘Far Dwuma Nkɔdo’ project being implemented by the Environmental Justice Foundation and ‘Hen Mpoano’ with funding from the European Union, supported the Fisheries Commission to train a 15-member Landing Beach Enforcement Committee in each of the 48 coastal communities in the Central Region.

The members of the enforcement committee are democratically elected by the fisher folks, with the exception of the Chief fisherman and Fisheries Commission officer who both served as chairmen.

Membership of the committee is generally voluntary, although in Elmina, fishers have decided to give a small portion of their catch to support the ten-member committee to ensure sustainability.

The arbitration committee has five members, namely an officer of the FC, Ghana Police Service, the Chief fisherman, a representative each of fish processors and traditional leaders.

Speaking at the launch, Mr Peter Canicius Kuusaana, Programmes Coordinator for the EJF, said the establishment of the landing Beach enforcement committee would add more value to the recently launched co-management policy adopted by the Commission.

Mr Charles Smith, Communications Officer of EJF, explained that the enforcement committee members were trained on how to use the DASE mobile application developed by the Far Dwuma Nkɔdo project for effective community surveillance and patrols.

The app, he said, allowed fishers with compatible smartphones to record geotagged images and film of illegal activities at sea, which are reported to a central database for use as evidence in prosecutions.

He said the fishers had also been trained on the boundary of the Inshore Exclusion Zone (IEZ) reserved for artisanal fishers using maps produced by the Far Dwuma Nkɔdo project, as well as their rights and responsibilities such as marking their fishing gears and adopting responsible practices.

“The local fishers have also been informed of the FC’s protocol for reporting infractions at sea in order to help them to claim compensation where appropriate, and report on illegal fishing to assist the work of the enforcement authorities,” he said.

DSP Sebastian Folivie of the Marine Police Unit in Sekondi, Lieutenant Commander Charles Darkwa from the Sekondi Naval Base and Madam Matilda Ajakemeh, Acting Central Regional Director of the FC all took turns to advise the committee members.

They implored the members not to be selective in the discharge of their duties but work within the confines of the law.