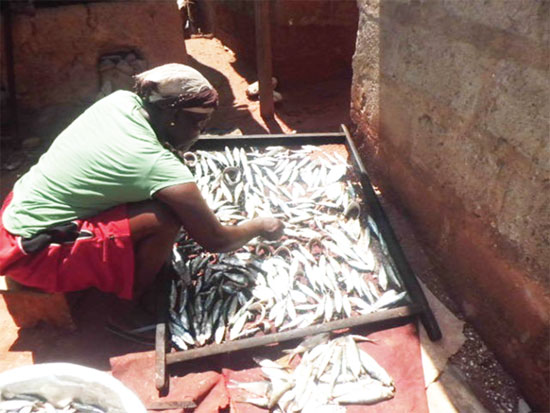 In the wake of the deadly coronavirus pandemic, the Fisheries Commission (FC) has called on fishers and fishmongers to adopt the health protection measures to prevent the spread of the flu-like coronavirus.

It called on fishmongers who travel from place to place to market their fish to pay attention to public announcements being made in the media and the public announcement vans to regularly use sanitizers and thoroughly wash their hands with soap after any interaction with members of the public.

Madam Rebecca Sackey-Mensah, an officer at the Marine Fisheries Management Division in Accra, said this to canoe owners, chief fishermen, fishmongers and other stakeholders from the Fisheries Commission at the Fisheries Closed Season Stakeholders Dialogue at Agona-Nkwanta in the Ahanta-West Municipality.

The Fisher to Fisher dialogue afforded the stakeholders the opportunity to solicit views on the ideal month for this year’s closed season.

The Western Regional Fisher to Fisher Dialogue is being sponsored by the USAID.
Madam Sackey-Mensah said the World Health Organization (WHO) has identified the scourge as very disheartening and stressed the need for Ghana to be on high alert as the pandemic was gaining grounds globally.

She said just as preventive measures were adopted during the Ebola outbreak, same must be done to mitigate the spread of the coronavirus in the country.

She advised fishmongers, fishers to avoid handshakes just as the President has directed.
Professor Godfrey Baidoo-Tsibu, the Western Regional Director of Fisheries, warned that the use of DDT, dynamite and light fishing among others, made the fish caught toxic which is harmful to consumers.

He called on fishers to halt all forms of Illegal, Unreported and Unregulated (IUU) fishing in the country.

Mr Abaka Edu, Secretary to the Ghana National Canoe Fishermen Council (GNCFC), said to ensure a successful Closed Season which is the spawning period of the fish stock, it behooves on government to ban the trawlers on the high seas whose unchecked activities destroy the juvenile fishes.

Madam Henrietta Eyison, the Municipal Chief Executive (MCE) for Ahanta-West, whose speech was read for her, asked the fishermen to sacrifice in the short term and gain in the long term by allowing the juvenile fishes in the sea to grow.
She said government would dialogue with fishermen on how best to leverage pre-mix fuel to boost fishing activities in the country to ensure food security.

Madam Eyison called on the fishermen to pay their dues to help the association flourish.

Ghana FA Congress: “No Vaccination, no entry to the stadium” – Kurt Okraku