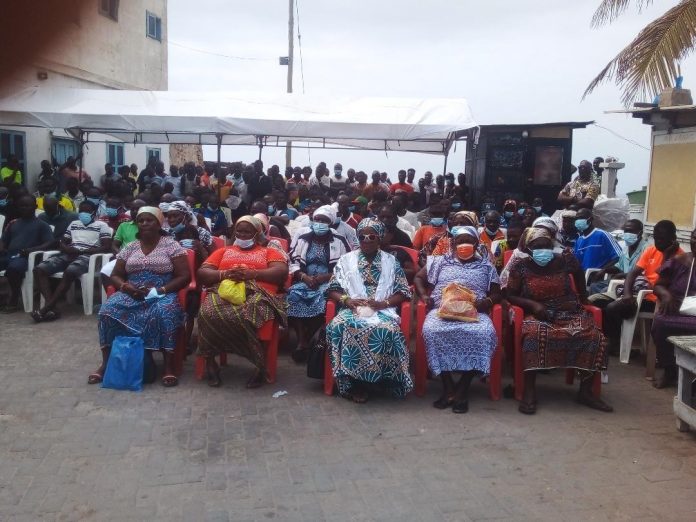 Mrs Mavis Hawa Koomson, Minister of Fisheries and Aquaculture Development (MoFAD), says the Ministry is poised to combat and eliminate the use of illegal methods for fishing.

She said illegal fishing methods, including the use of light, dynamite and Dichloro-diphenyl-tricholoroethane continued to pose serious health implications to fish consumers and affected the country’s fisheries value chain.

Mrs Koomson at a ceremony to distribute relief items to fisher folks at the Ga Mashie Landing Beach, a fishing community in the Greater Accra Region said, the EU had given Ghana a “yellow card”, banning fish exports from Ghana into the 28-nation trade bloc in 2013.

She said, ‘‘The yellow card means you are not disciplined and using illegal methods to fish, and if you do not stop, you would be shown the red card and your name would be cancelled for exportation of fish.”

The Minister, therefore, appealed to the fisher folks to desist from the use of the illegal methods because recalcitrant fishermen who would be caught flouting the fisheries law would be prosecuted.

She presented 50 bags of rice and 21 cartons of cooking oil on behalf of the Ministry and Government to the fisher folks at Gamashie as support during the closed fishing season, which began on July 1 this year, to replenish fish stock and reduce its over-exploitation in the sea.

Similar donations would be done in other fishing communities, including Chemuenaa, Lanteyman, Tema and Kpone, all in the Greater Accra Region.

Mr Robert Nettey, Public Relations Officer of fisher folks at Ga Mashie Landing Beach, commended the Minister for the gesture and urged her to be firm in the implementation of the law banning the use of illegal fishing methods.

He appealed to Government to regulate the fishing trawlers on the sea because it made their work difficult.