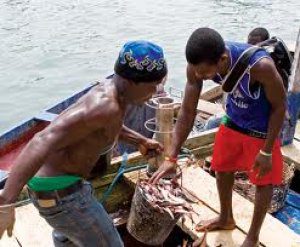 Fishermen in Abuesi, a fishing community in the Shama District of the Western Region have rendered an unqualified apology to the Ministry of Fisheries for attacking officials of its Fisheries Enforcement Unit (FEU) during their usual patrol.

The fishermen on Wednesday, October 29 attacked officials from the Fisheries Enforcement Unit (FEU) of the Ministry of Fisheries who were on their routine patrol at the beach and vandalized their official vehicles.

Some of the officials also got injured and have since been receiving treatment at the hospital.

Nana Kwadwo Konduah V, the Chief fisherman of Abuesi in a press statement condemned the action of the fishermen and said it was criminal against the laws of the country.

He recounted that the aftermath of the incident had been unbearable for the leaders in the community, as 10 of the perpetrators were arrested and put behind bars.

He said the whole community was living in fear and the fishermen could not embark on their fishing expedition anymore and described the action of the fishermen as undeserving and said it should not go unpunished.

He however pleaded with authorities to temper justice with mercy and pledged that his outfit together with leaders in the community would assist authorities to fish out perpetrators for the required punishment to be meted out to them to serve as a deterrent to others.

He commended the FEU team for exhibiting high level of professionalism despite the provocations and attacks on them and thanked the various stakeholders and recognised the efforts of some individuals for their enormous support.

He also appealed to his people to exercise restraint and reflect on their misbehavior to prevent any grievous situation.