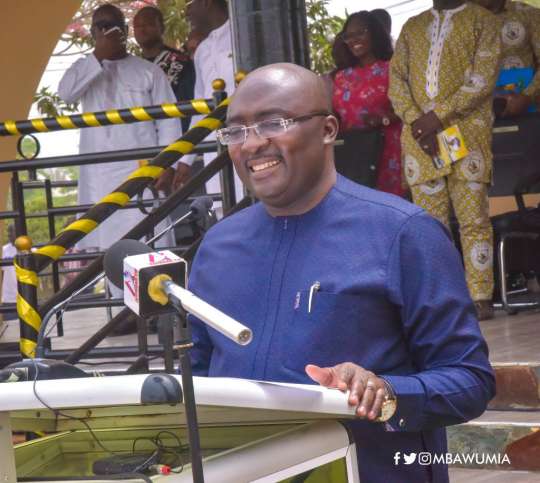 Vice President Dr Mahamudu Bawumia on Thursday assured fishmongers that the Government will provide them with small scale loans to enhance their businesses should the NPP government win the December 7 polls.

The loans, he said, would be disbursed from the one-million-dollars support given to each constituency under the Coastal Development Authority.

Dr Bawumia gave the assurance at a durbar of fisher folks at Tema Fishing Harbour during a working tour of the Greater Accra Region, where he inspected an ongoing construction works of a multipurpose sports resource centre at Tema Manhean.

Dr Bawumia interacted with commercial drivers at Tema Community One and assured them of government’s determination to facilitate processes towards speedy acquisition of driving licences.

The Vice President said a much bigger cold store facility would be constructed for the Tema fishing community to enhance their businesses and mentioned ongoing construction works of landing beaches in some fishing communities and the James Town Fishing Harbour.

Dr Bawumia said the premix fuel shortage experienced during electioneering period had been resolved because of efficient structures put in place by the government.

He said Ghanaians were witnessing much better governance and leadership under President Akufo-Addo’s government and entreated Ghanaians to renew its mandate for four more years to deliver more developmental projects.

Dr Bawumia outlined some policies and programmes the Akufo-Addo-led government had implemented including; the Free Senior High School, One-District,One-Factory, One-Village,One-Dam,and Planting for Food and Jobs.

Other projects earmarked for implementation in its 2020 manifesto include: the National Transport Recapitalization Scheme, Leasing programme to enable commercial drivers own new vehicles, Tertiary Loan Scheme for university students to receive loans and pay it after completion of school and National Rent Allowance Scheme for workers to rent decent accommodation and later be deducted from their salaries and expand the Free Senior High School policy.