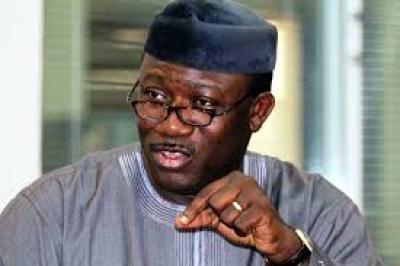 ?The autonomy granted to five communities in Ekiti State has no political undertone. Neither was it granted to cause disaffection among the people but based purely on historical facts and for administrative convenience to fast-track development.?

The above were the words of Governor Kayode Fayemi at yesterday?s presentation of the Instrument of Appointment and Staff of Office to
the newly installed Onijaro of Ijaro-Ekiti, Oba Ebenezer Olubunmi Ogunleye at the Community Square of Ijaro, in Ilejemeje Local Government Area.
Ijaro-Ekiti is the fifth community granted autonomy by the administration of Fayemi.  Monarchs have been installed in all the communities.
The other four communities are: Ejiyan-Ekiti in Ijero Local Government Area, Orun-Ekiti in Irepodun/Ifelodun Local Government Area, Omuo
Oke-Ekiti and Ikota-Ekiti, both in Ekiti East Local Government Area of Ekiti State.
Represented by his deputy, Prof. Modupe Adelabu, the governor explained that granting of autonomy to deserving communities were carried out with adequate consultations with the relevant stakeholders and with the recourse to appropriate laws in a manner that was purely objective and based on principle of fairness and justice.
He said: ?Granting of autonomy to any community is not an attempt to fractionalize or disintegrate a hitherto compact community for any
ulterior motive but as a response to genuine demand of the people who felt that their recognition would enhance their socio-ecomic
development.?
Fayemi congratulated Oba Ogunleye for his ascension to the throne as the maiden Onijaro of Ijaro-Ekiti which he described as an act of
providence with its attendant responsibility of leading his people to the Promised Land.
Enjoining the people to live peacefully with their neighboring communities, the governor also urged the sons and daughters of the
community both at home and abroad to cooperate with their monarch in order to attract more development to the town.
Responding, Oba Ogunleye described the procedure from granting Ijaro-Ekiti community autonomy to his appointment, confirmation and
ultimate installation as the first monarch in the community as an act of God which will forever been preserved for posterity.
According to him, his installation was historic as it marked the first time in history of Ilejemeje that all the Seven Obas are complete.
He thanked the Fayemi-led administration for bringing to pass the dream of a people with an assurance to use his good office to project
the good image of the community and Ekiti State in general.