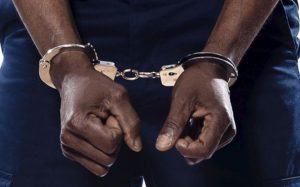 Five foreign nationals have been arrested for entering the country through an unapproved route at Hamile in the Lambussie District of the Upper West Region.

The Upper West Regional command of the Ghana Immigration Service (GIS) told the GNA in that the migrants, who were all Burkina Faso nationals aged between 15 and 27 were arrested at the weekend on two motorbikes with registration numbers 32-UJ-6586 and 32-JW-5633 at Beat 2 unapproved route bordering Burkina Faso.

Mr Ibn Yussif Duranah Abdul-Mumin Seidu, the Upper West Regional Public Relations Officer for the Service said “Preliminary investigations revealed that they were travelling to Kumasi and Techiman for farming purposes”, he said.

Mr Seidu explained that the illegal migrants were screened by the Port Health Personnel and handed over to the Burkina Faso authorities on the other side of the border, while the motorbikes had been impounded.

“As far as our operational functions are concerned, coupled with the President’s directive on the closure of our borders as part of the measures to halt cross border infection of COVID-19, the Ghana Immigration Service is leaving no stone unturned in ensuring that undocumented, prohibited and irregular migrants are not allowed entry into Ghana through unapproved routes”, he explained.

Mr Seidu, therefore, entreated the general public, particularly, the border residents to collaborate with Ghana Immigration Service and to volunteer information on illegal migration to the GIS to help end the menace.

“The service wishes to remind the Ghanaian citizens who are complicit in the exodus migration of other ECOWAS nationals into Ghana through unapproved routes to either desist from the illegal act or be prepared to face the wrath of the law’ he warned.

U.S. repeating mistakes it has made with COVID-19