Lighting the flame of hope and laying of wreath at the Kigali Genocide Memorial Centre marked the start of the 23rd commemoration of the 1994 genocide against the Tutsi in Rwanda. 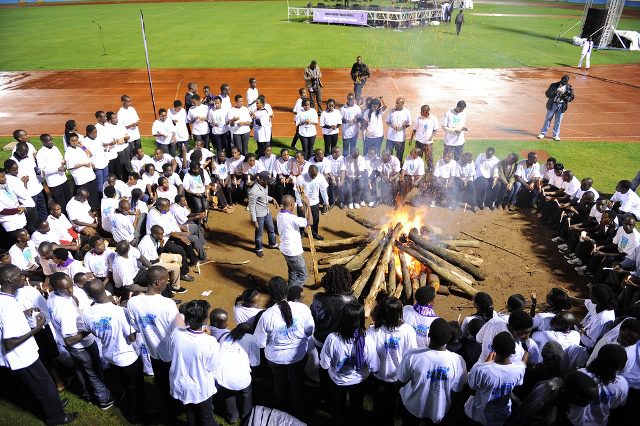 Rwandans and friends of Rwanda all over the world on Friday marked the 23rd anniversary of the 1994 Genocide that claimed close to one million lives of majority ethnic Tutsis and minority Hutus.

Rwandan President Paul Kagame and Rwanda First Lady Jeannette Kagame together with the African Union Commission Chairperson, Moussa Faki Mahamat laid a wreath at the genocide victim’s mass graves and as well lit the flame of remembrance at the Kigali Genocide Memorial at Gisozi in the country’s Capital.

The flame of remembrance will burn for 100 days marking three-month-long mourning of the victims of the 1994 genocide until July 4 when the genocide was stopped by the Rwanda Patriotic Army (RPA) now Rwanda Defence Forces (RDF).

Kigali Genocide Memorial is home to more than 250,000 genocide victims. It has three permanent exhibitions, the largest of which documents the 1994 genocide. There is also a children’s memorial and an exhibition on the history of genocide around the world.

This year’s genocide commemoration is observed under the theme “Remember the Genocide against the Tutsi — Fight Genocide Ideology — Build on Our Progress.”

Speaking at the event to kick-start commemoration activities, Kagame paid tribute to African nations that stood up against those who tried to turn victims of the genocide against the Tutsi into perpetrators.

“There is nothing we can do about the past but there is something we can do for our people in the present. We are not asking for money, there is no money to compensate the lives we lost. It is the truth we are asking for,” Kagame said.

He noted that genocide was perpetrated against the ethnic Tutsis and global debate on how to call the genocide against Tutsis is “absolute nonsense.”

The memorial observance that falls on April 7 begins with a commemoration week that involves several activities among others, visiting and laying wreaths at memorial sites, according decent burial to exhumed genocide remains, giving testimonies, public lectures, and candle lighting vigils.

The activities officially last a week, but the commemoration continues up to July 4, marking 100 days of genocide.

At the event, AU Commission Chair called on Rwandans to work together and build their country for a better future of the generation to come.

No form of entertainment is allowed during the main commemoration week, April 7-13.

Throughout the week the Rwandan flag will be flying at half-mast in honor of the victims, while civil servants will be working for half a day during weekdays to enable them to participate in community discussion organized as part of commemoration activities.

Later in the afternoon hundreds of youth participated in the ‘Walk to Remember’ from the Rwandan parliamentary building to Amahoro National Stadium. Enditem

AGRF 2022 Summit kicks off in Kigali