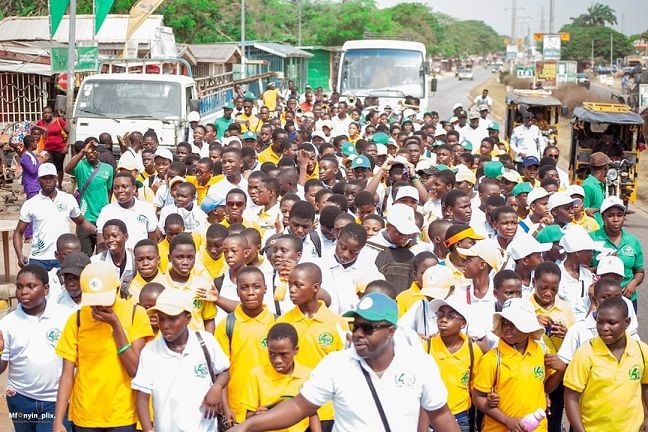 The management, staff and students of the Flowers Gay Schools in Cape Coast have climaxed its week long 40th anniversary celebration with a founder’s day service and an epic worship.

The School, from its humble and modest beginning 40 years ago, has shown class and grown to become
unarguably one of the best private and the most preferred schools in the Cape Coast Metropolis.

The Flowers Gay Schools was established by Mrs Selimy Gifty Quaynor of blessed memory, on 7th January
1980 as a nursery school with three children at the garage of her residence in Third Ridge residential area in
Cape Coast.

The number increased to 13 by the end of its first term and continued to rise seven years after, the primary
section was added.

After 13 years, the school moved from third ridge, where it was located to its present location at North OLA,
with a beautiful school structures and a spacious compound.

With hard work and tenacity, the school began its Junior High School in 1994, with eleven pupils and eight
of whom passed with distinction at its first Basic Education Certificate Examination (BECE) and had since
continued to record excellent passes to date.

Series of activities including; a float through the principal streets of Cape Coast, a clean-up exercise and a
health screening exercise, peer coaching and counseling session, debate and quizzes, an open day and
exhibition, fun fair and games were undertaken as part of the celebration.

Mr Kwete Quaynor, the Proprietor of the School expressed joy and gratitude to God for how far the School
had gotten and said the Founder’s efforts in establishing the School was rewarded beyond imagination.

He said the Flowers Gay Schools had become the one of the most cherished and sought after private schools
in the Cape Coast community and beyond due to its continued excellent performance.

He said the school’s unique role in nurturing pupils with excellent academic performance and biblical and
moral values was evident in the students they churned out over the years.

Living up to its motto, “By their fruits, ye shall know them”, Mr Quaynor indicated that the school had
produced products that were working in various sectors of the economy in the country and beyond.

He said the school would continue to pursue high academic standards and hold on to its Christian values
that propelled it to great heights.