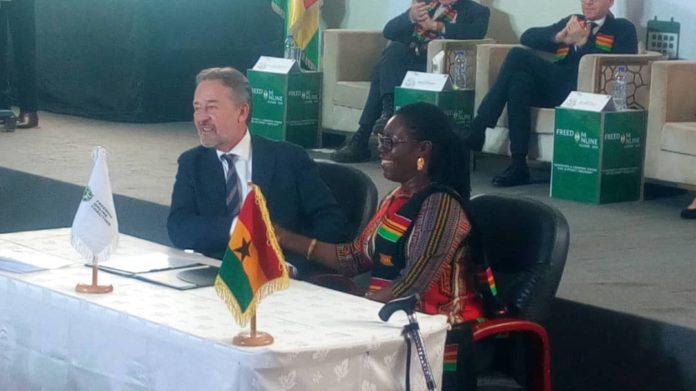 A two day freedom online conference 2020 has been held in Accra to promote global inclusion in the digital divide under the theme: “Achieving A Common Vision For Internet Freedom.”

The Minister of Communication Hon. Ursela Owusu-Akuful in her keynote address explained that the country happens to be the third in Africa to host the event, and the first in west Africa.

“I am glad that the freedomonline policy has opened up its doors to all of us”. Adding that, the right of the citizens was paramount in as much as the government was pushing for digital freedom,

According to the Minister, the government is improving on infrastructure in the digital sector, as well as working to improve the rights of the citizens in its usage.
She added that last year, Ghana passed the right to Information Bill into law in order to foster a culture of transparency and accountability.

The Minister made known that in the international front, Ghana is the first to rectify the right of the child, and that the country is as well part of several human rights treaties, and conventions. Stating that, the role of the human beings who are going to be using the technology is crucial in the dialogue.

This to her, access to internet for all is key, and that the average internet user now spends six hours on it, and the global user has now increased remarkably.

“More than half of the population leaving in unconnected areas is acute,” and that some “3.6 billion people are without access”. And about 80 percent in the developing world are still without access, so the conference would promote global inclusion in the digital divide.

She was speaking at the two day freedom online conference 2020, at the Kofi Annan International Peacekeeping Training Centre (KAIPTC), on Thursday 6th February, 2020.

“In my opinion internet shutdown is not an option; it must be used in accordance with the law”. It important that people enjoy these freedoms with responsibility”, She noted.

The Hon. Minister of Communication observed that access and cost of internet usage was crucial, and should be considered in the tow day conference dialogue. She noted that fake news, cyber bullying, criminal abuse of children were greater threats, and there was the need to craft appropriate guidelines to regulate the evils.

“We cannot do without technology, I believe that it will present Africa with the unique opportunity to leap frog develpment. It should be available and affordable to people leaving in unreserved areas.” She said.