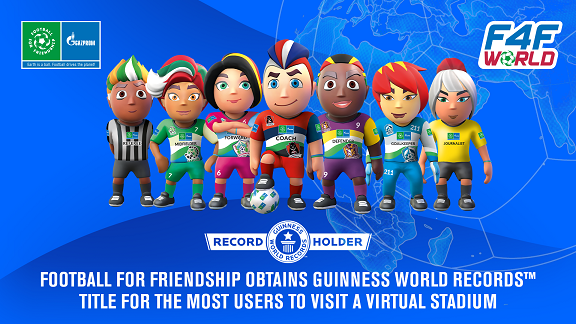 Today, during the live broadcast of the Football for Friendship Grand Final, the official adjudicator Joanne Brent confirmed that the Gazprom International Children’s Social Programme Football for Friendship achieved its 3rd GUINNESS WORLD RECORDSTM title. The successful record attempt took place on May 26th and officially announced and confirmed on the occasion of the Grand Final of the Ninth Season of the programme on 29th May.

In the run-up to the record attempt, the Global Ambassador for Football for Friendship, the Brazilian football legend Roberto Carlos, reached out to all the participants with a message of motivation. “Let us all become part of a major event. We are all participants in the Gazprom Football for Friendship programme. We will get this record! Let’s get to it!” he called out to the young people. They were also supported by the two-time Russian football champions Yevgeni Aldonin and Dimitri Sennikov, the Russian footballer of the year (2004) Dmitri Sychev and the ambassador for Russian women’s football Elena Ryshkova. Russian TikTok stars twins Katya and Nastya together with Kirill Kolesnikov were present as well.

The multiplayer football simulator Football for Friendship World (F4F World) was specially developed for F4F in 2020. International team matches can be organised on this platform in real time. From 24th May 2021 onwards, the 2021 Football for Friendship eWorld Championship (eF4F) with a total of 32 teams, and players from over 200 countries, was contested.

Football for Friendship already holds two GUINNESS WORLD RECORDSTM titles. In 2019, F4F achieved a GUINNESS WORLD RECORDSTM title for the most nationalities in a football training session. The session took place on 31st May 2019 in Madrid as part of the final events of the Seventh Season of F4F. The skills class, which players of 57 different nationalities took part in, was held by the Head of the Soccer Barcelona Youth Academy Miguel Puig and by Josep Gambao, a former trainer of the FC Barcelona youth team.

On 5th December 2020, a new GUINNESS WORLD RECORDSTM title was achieved in the course of the closing events of the Eighth Season of Football for Friendship for an online training session with the most participants. Young Players from more than 100 countries in Europe, Asia, Africa, North and South America, Australia and Oceania came together and took part alongside world-famous football stars in this digital football event. In total, over 1000 participants were registered for the course, which was streamed online.

Roberto Carlos, Global Ambassador of Football for Friendship: “Today, my friends, is a very special day, and you will all go down in history. Today, we are attempting to achieve a new GUINNESS WORLD RECORDSTM title. I too play video games, and my favourite is the simulator “Football for Friendship World”. And today I am going to be playing with you and supporting you in your attempt to set this new record.”

About Football for Friendship

The International Children’s Social Programme Football for Friendship has been organised and run by Gazprom since 2013. Over the previous eight seasons, more than 15,000 children and young people from 211 countries and regions have taken part in the programme. And more than 6,000,000 people support the project.

Boys and girls aged between 12 and 14, including children with disabilities, participate in the project as “Young Players” or “Young Journalists”. Young Players represent different countries and cultures. They show that nationality, gender, and physical abilities aren’t a barrier to becoming a team. Young Journalists report on the Football for Friendship projects in the International Children’s Press Centre. All former participants later become “Young Ambassadors” for the programme and continue to share their experience and to promote the universal human values which Football for Friendship stands for: friendship, equality, fairness, health, peace, devotion, victory, traditions, and honour.