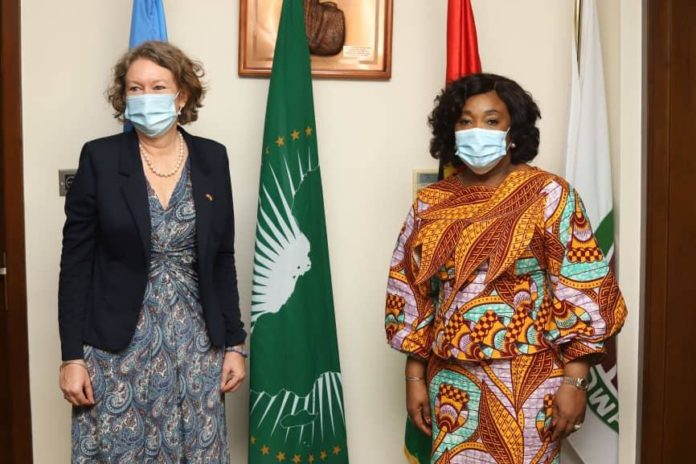 The Minister lauded the excellent bilateral relationship between Ghana and Denmark and expressed sadness about Madam Degnbol’s departure after a five-year duty tour of Ghana, saying that she would be dearly missed.

She noted that over the years, Ghana and Denmark had shared warm, long-standing and cordial relations, back to the 1960’s with extensive development cooperation in several sectors including health, water and sanitation, rural roads, decentralization, support to the Judiciary, civil society, private sector development, poverty alleviation, and the promotion of sustainable development through programmes and projects implemented by the Danish International Development Agency.

The Foreign Minister commended the Danish Ambassador for her commitment to the realization of the new strategic sector cooperation between Danish and Ghanaian authorities in maritime and statistics.

Madam Ayorkor Botchwey added that the Ambassador’s highly distinguished work in Ghana had further enhanced the fruitful relations between the two countries.

She said the warm relations were evident in the exchange of high level visits including the State visit of Danish Queen Margrethe II from 22nd to 26th November, 2017 where a number of Memoranda of Understanding (MoUs) and agreements were signed including a letter of Intent between Ghana Investment Fund for Electronic Communication (GIFEC) and Bluetown Aps; Base of Pyramid Partnership Agreement between Novo Nordisk Pharma Gulf FZ-LLC and the National Catholic Secretariat, Health Directorate (National Catholic Health Service).

The Minister highlighted one of the high points of her tenure in the role she played in the renewal of the MoU between the Ministry of Sanitation and Water Resources and Grundfos Holdings A/S (Grundfos Ghana ltd).

It helped to put Ghana on course to meet the SDG goal of achieving universal access to water by 2030 as well as the MoU between Ghana National Red Cross Commission and APM Terminals and Amend, an Africa Road Safety Specialist.

Madam Ayorkor Botchwey said Ghana remained strongly committed to promoting friendly and cooperative relations with Denmark, hoping that even after completion of her duty tour in Ghana, she would continue to be a close friend of Ghana and further support the enhancement of the relationship between the two countries.

The Minister wished Madam Degnbol well in her future endeavours.

Madam Degnbol said her successor would be arriving in Ghana in a week’s time and would go through the 14-day COVID-14 mandatory quarantine, making a total of three weeks before assuming duty.

She expressed gratitude to the Minister for the warm hospitality accorded her during her duty tour.

Madam Degnbol also thanked the Minister for the good collaboration during the state visit of the Queen of Denmark to Ghana in 2017.