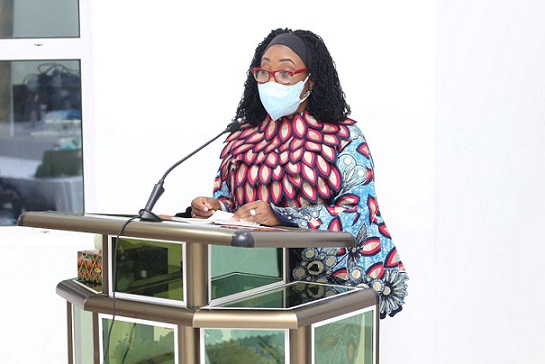 The event is geared towards safeguarding food security in West Africa and ensuring a sustainable future for ECOWAS citizens.

Madam Ayorkor Botchwey expressed gratitude to the ECOWAS Commission, the Commissioner for Agriculture, Environment and Water Resources, local, regional and international partners and experts for their effective collaboration, not only in the organization of the Conference, but also for their hard work and dedication over the years towards achieving the regional and global aspiration of reducing food insecurity, malnutrition and poverty.

She extended her appreciation to the European Union for its unwavering dedication and support to the implementation of the West Africa Food Security Storage Support Project of which Ghana is a beneficiary.

“Indeed, the impact the project has had on my country, Ghana, cannot be overemphasized,” she said.

She said the success of Ghana’s efforts to ensure food security and curb malnutrition through the ongoing School Feeding Programme and Free Senior High School, could be largely attributed to initiatives such as the West Africa Food Security Storage Support Project.

The Minister said the Government of Ghana, as part of the implementation of the Regional Food Security Storage, continues to enhance the country’s food storage capacity and strengthen the National Food Buffer Stock Company (NAFCO) to manage these storage facilities, as well as ensure that agricultural produce were safe and suitable for human consumption at all times.

She said the enhancement of storage systems in Ghana and across the sub-region was also linked to the creation of employment in the informal sector.

Madam Ayorkor Botchwey said she was delighted to indicate that Ghana, with the support of ECOWAS, had domesticated its national storage policy in line with the implementation of the regional food security storage strategy in West Africa.

She said while previous and on-going campaigns for food security in the sub-region had led to an appreciable improvement in the performance of both the agricultural and food storage sectors, food and nutritional insecurity still remained a major area of concern for Member States.

“It is for this reason that all Member States and relevant stakeholders need to boost their collaborative efforts for the operationalization and success of the regional reserve which is necessary and fundamental in the consolidation of regional solidarity and integration,” she stated.

She recalled that the West Africa Regional Food Security Reserve was adopted in February 2013 by ECOWAS Heads of State and Government to strengthen the region’s leadership in the resolution of food, nutrition and pastoral crises.

Adding that it was intended primarily for emergency operations in the event of a crisis and consists of one-third physical stocks and two-thirds financial reserves.

Madam Ayorkor Botchwey said the Regional Food Security Reserve complemented the efforts of the Member States to provide rapid and diversified food and nutrition assistance, express regional solidarity to Member States and affected populations through transparent, equitable and predictable mechanisms, contribute to food sovereignty and to the political, economic and trade integration of West Africa.

She said with the political support of the G20 and the financial support of the European Union, the ECOWAS Commission, in 2015, commenced work towards the effective operationalization of this regional storage system as an important step in integration and regional solidarity.

The Minister said after five years of implementation of the Project, an internal assessment had revealed important achievements, challenges and lessons learnt in order to make the regional stockholding strategy a decisive instrument for the elimination of hunger in the region by 2030.

She said it was her fervent hope that the Conference would provide the much-needed platform for information and experience-sharing on food storage systems between West Africa and its global partners.

She noted that the outcome of their deliberations should also facilitate the creation of a renewed multilateral partnership to strengthen the resilience of the regional storage system and its capacity to respond effectively to the existing food, nutrition and pastoral crises.

She said over the next week, their eminent panellists would facilitate discussions on issues ranging from the region’s vulnerability to food and nutrition insecurity, the roles of stocks in promoting sustainable food systems and building the regional food market to the roles of food reserves in building household resilience and social protection.

She called on all stakeholders to remain committed to the crisis response coordination mechanisms both at the national and regional levels under the leadership of ECOWAS.

She reassured all their partners of ECOWAS’ resolve and commitment to deepen dialogue with financial institutions and partners to establish sustainable mechanisms to respond to the financing needs of food storage and marketing on the one hand, and solidarity interventions in the face of food, nutrition and pastoral crises on the other.