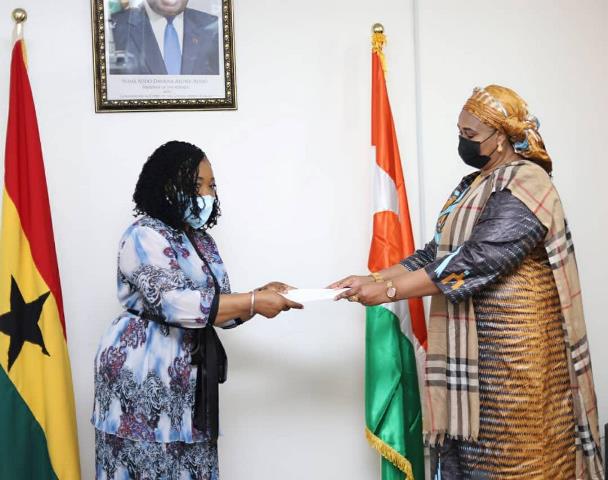 During the meeting, the Minister recalled with satisfaction the long history of brotherliness, friendship, cooperation and mutual assistance that had characterised relations between Ghana and Niger for more than a century.

She said the pioneering efforts of the first Presidents of the two countries, Dr Kwame Nkrumah and Mr Hamani Diori, to unite the African continent with a common purpose of African emancipation had strengthened cooperation towards the consolidation of peace, economic liberation and poverty eradication between the two countries.

Madam Ayorkor Botchwey noted that the relations, in recent times, had been cordial as both countries maintained close ties in various spheres of mutual interests, particularly, on issues of economy, trade and security.

In furtherance of her commitment to deepening relations with Niger, the Minister stressed that Ghana desired to construct a permanent structure to house its Chancery and the Ambassador’s residence in Niamey.

In that regard, she reiterated Ghana’s request for a parcel of land within the diplomatic enclave of Niamey to construct a Chancery and Ambassador’s residence and expressed the hope that in the spirit of the historical relations that exist between the two countries, the Government of Niger would expedite action on Ghana’s request.

She recalled that Ghana and Niger signed a five-year Bilateral Agreement on General Cooperation on 19th June, 2018 and underscored the importance of commissioning a Permanent Joint Commission for Cooperation (PJCC) to serve as a forum for addressing the challenges and implementation of the agreement.

Madam Ayorkor Botchwey mentioned the presence of two officials from the Ministry of Secondary Education of Niger currently in Ghana and observed with admiration the desire of the Nigerien Government to draw inspiration from the management methods of Ghana’s educational system.

She however, highlighted that under the framework of the General Agreement, there had been minimal cooperation on educational exchanges between the two countries.

She noted that the excellent relation was further demonstrated by the over one million Nigeriens in Ghana who were engaged in trading activities and a large number of Ghanaians also living and working in Niger.

Madam Ayorkor Botchwey congratulated the Niger Independent National Electoral Commission (CENI) for their outstanding role in ensuring a successful election and noted with satisfaction, the democratic path embarked upon by the brotherly people of Niger that resulted in the free, fair and credible run-off election in December, 2020.

In that regard, she recalled the recent donation of 100,000 ink stamp pads made by Ghana to Niger to facilitate the latter’s second round of presidential election.

The Minister conveyed through her to the Government of Niger warm congratulations for the successful democratic transition of power in February, 2021 and commended the peaceful settlement of her post electoral disputes.

She emphasized the Government of Ghana’s commitment towards consolidating existing friendly ties and expanding the scope of economic and technical cooperation between the two countries and assured of Ghana’s commitment to work with Niger towards maintaining the excellent relations existing between the two countries, as well as consolidating the peace in the sub-region.

The Minister wished the Ambassador-Designate a successful duty tour and assured her of Ghana Government’s continuous support in the execution of her mandate.