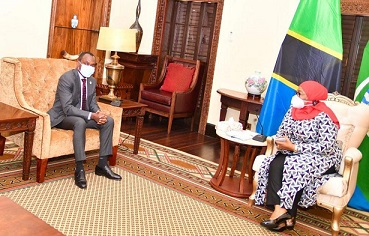 Justice Sylvain Oré immediate past President, African Court on Human and Peoples’ Rights has called on the President of Tanzania, Mrs Samia Suluhu Hassan at the State House in Dar es Salaam.

Justice Ore, used the occasion to bid farewell and thank the government and people of Tanzania for the support during his presidency at the African Continental Court which is located at Arusha, Tanzania.

Justice Oré also thanked the government of Tanzania for hosting the African Court and facilities availed to it, this was contained in a document made available to the Ghana News Agency at Tema by the African Court Communication Department.

He however reiterated an appeal for the construction of the permanent premises for the African Continental Court which would ease the acute office accommodation problems facing it.

The Former African Court President implored on Tanzania, as a host country and a champion of human rights, to reconsider its position on the withdrawal of its Declaration.

Justice Ore updated the Tanzanian President of activities earmarked for the 15th anniversary since its operationalisation, and measures adopted to ensure the effective discharge of its mandate.

He gave the example of the New Rules of Court, which were adopted in September 2020. The new Rules of Court seek to enhance the effectiveness of the Court by, among other things, improving the management of cases as well as ensuring better implementation of the decisions of the Court.

Other members of the delegation of the Court included; Lady Justice Imani Daud Aboud the new President of the African Court; Justice Tujilane-Rose Chizumila and Registry staff.

During the discussions, President Samia Hassan assured the African Court of the government’s full support for the continental court, adding that her country was fully committed to the objectives of the Pan Africanism and in particular, its judicial body which hosted by Tanzania.

“My government fully stands with the Court and its work,’’ assured President Samia Hassan.

The Tanzanian President also appreciated the African Court’s efforts at strengthening human and people’s rights across Africa and assured that her government would put initial money for the construction of the permanent premises of the African Court at a location outside Arusha.

The African Court is currently housed in a temporary location in the Tanzania National Parks (TANAPA) complex in Burka area.

“We will put in the seed-money to construct the building and invite our other friends to join-in for the construction of the building”.

On Tanzania’s withdrawal of its Article 34(6) Declaration, which allows citizens direct access to the Court, the President said her government would look into the matter, although its current position was unchanged.

Tanzania notified the African Union of the withdrawal of its Declaration on 21 November 2019. The said withdrawal took effect on 20 November 2020.