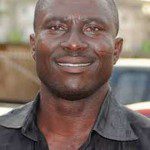 Residents of Sunyani, especially football fans on Sunday afternoon had a shock of their lives on hearing about the sudden death of Mr. ?King? George Arthur, former Ghana Black Stars and Asante Kotoko Football Club (FC)player.

The late Arthur who also played for the Brong-Ahafo (BA) United FC before Asante Kotoko, one time became the Chief Executive Officer (CEO) of the former, and was also at a period coach of a national women?s football team.

Reports on local FM Radio Stations said the late Arthur after church service was playing draught in the afternoon under a tree with his friends.

The reports explained that in the process he shouted unexpectedly of heart pain, and started falling back from the seat, but was assisted by the friends who rushed him to the Sunyani Regional Government Hospital where he was pronounced dead on arrival.

His body has since been deposited at the hospital’s morgue pending autopsy.