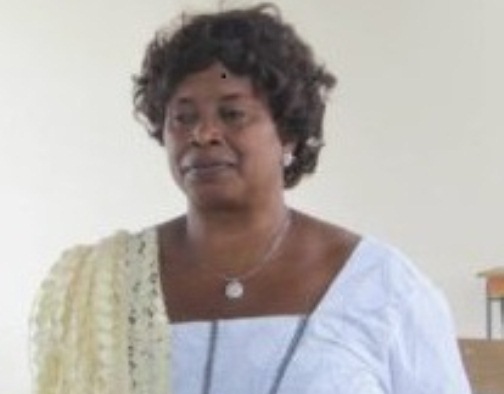 Members of the Biakoye District Assembly have been entreated to, this time round, reconsider their stance and accept the President’s nominee for the District Chief Executive (DCE) position, Millicent Kabuki Caboo.

The call was made by Former Constituency Chairman and former Parliamentary Candidate (PC) of the ruling New Patriotic Party (NPP) in Biakoye, Hon. Daniel Korsina, when he organized an outreach program for Millicent Kabuki Caboo, to get closer to the grassroots and also solicit for support towards her endorsement.

Millicent Kabuki Caboo, popularly called Kiki was rejected by the Assembly members during her first nomination. Out of the total 43 votes casted during the first voting process, 18 members voted in her favour while 25 voted against her nomination.

However, the President has re-nominated her and with the hope that, she will be endorsed this time round.

Hon. Daniel Korsina during the outreach program through the ewe communities in the District, appealed to the Assemblymen to rescind their earlier entrenched positions and vote massively for Millicent Kabuki Caboo to become the DCE.

Speaking in an interview after the outreach program, Daniel Korsina believes that her endorsement will be a clear acceptance of the President’s own judgment of Caboo’s ability to deliver in that position.

He said, Assembly members should endeavor to vote and endorse all the 17 persons re-nominated for the DCE positions in the remaining District so as to help speed up government policies and programs in those areas.

Hon. Daniel Korsina also averred that, it will be in the best interest of the Biakoye District for all to have confidence in their DCE nominee to deliver excellently towards the development of the District and the nation at large.

He believes that, Millicent Kabuki Caboo will succeed as DCE if she is given the support she needs in carrying out her duties, adding that, “irrespective of who is nominated and endorsed as DCE, that person can only succeed when we, as people in the district and the assembly men and women give that person the needed support.”

“…I therefore appeal to our Assembly men who have the power to endorse and reject, to at this time, give the President’s nominee, Millicent Caboo, their votes,” he said.

He pledged his unflinching support to Millicent Kabuki Caboo and his continuous support towards the growth of the party.

As part of their outreach program, the two personalities, Hon. Daniel Korsina and Millicent Kabuki Caboo, donated fifty (50) and twenty (20) bags of Cement respectively to the ewe communities for a construction of a school block.

The donation of the seventy (70) bags of cement, according to Daniel Korsina was done on his own behalf and that of Millicent Kabuki Caboo and President Akufo-Addo’s behalf.

The Chiefs also gave their maximum support to the nominee and promised to talk to their assemblymen in their areas and that of the areas in Tapa to endorse the nominee.

The Ewe Chief Togbui CK Akpaliga pledged to unite behind the nominee and also pleaded with the assemblymen to vote massively for the president’s nominee.

In attendance were the constituency executives headed by the constituency chairman, Seleimana Imoro, who also pledged his full support for the nominee and advised the Assemblymen to vote for Hon. Millicent Kabuki Caboo.

On her part, Millicent Kabuki Caboo who has been re-nominated by the President also appealed to the Assembly men to vote for her this time round to become the DCE.

She said, she will work closely with all to ensure that the vision and programs of the NPP government are achieved.

Millicent Kabuki Caboo also indicated that, there is lot to be done for the District when they all stand united.

She expressed appreciation to Hon. Daniel Korsina for supporting her and pledged to deliver in her capacity as DCE.

“I am much enthused about the unflinching support given to me by our Former Constituency Chairman and former Parliamentary Candidate, in the person of Hon. Daniel Korsina, for organizing this outreach program at the Ewe chief’s palace at Abotoase, ” she said.