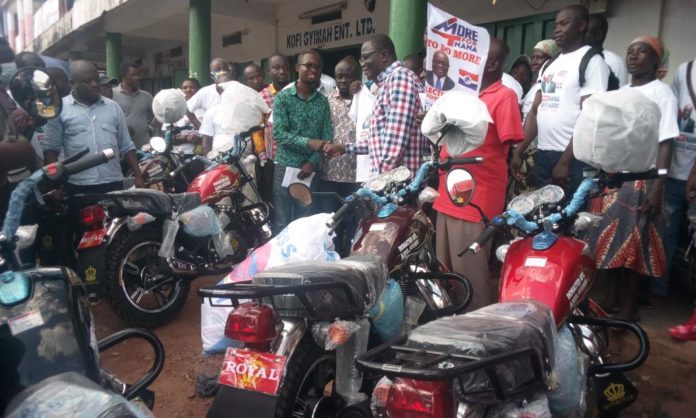 The Sunyani East constituency office of the party received two of the motorbikes and GHC5, 000 cash.

He told Journalists after a short ceremony held in Sunyani, the presentation was his support to enable the party to conduct an effective campaign and to reach out to voters at the grassroots to canvass for more votes for the NPP to win the general election.

Mr Kumi said the President had achieved a lot, hence the need to support the party to sell its achievements to the voting masses to enhance its fortunes in the December 7, polls.

He said he believed it was when voters at the grassroots recognised and appreciated the government’s laudable policies and programmes that they could make informed decisions when they go to the polls.

Mr Kumi advised supporters of the NPP to avoid complacency and intensified the electioneering saying with the performance of the government in the past three and half years, supporters had good campaign messages to sell to the voting population.

The former envoy noted that President Akufo-Addo had done a lot to deserve the votes of the electorate, and to bring the development of the nation to the next level.

Mr Kumi affirmed his commitment to support the party either in cash or in kind to win the elections overwhelmingly, and expressed the hope that the NPP supporters would bury their differences and forge ahead in unity for an effective electioneering.

Mr Frank Musah Damta, the Sunyani East Constituency Chairman of the NPP, who received the items thanked Mr. Kumi for the gesture and his love for the NPP, saying the items would enable the party to canvas for votes at the grassroots levels.