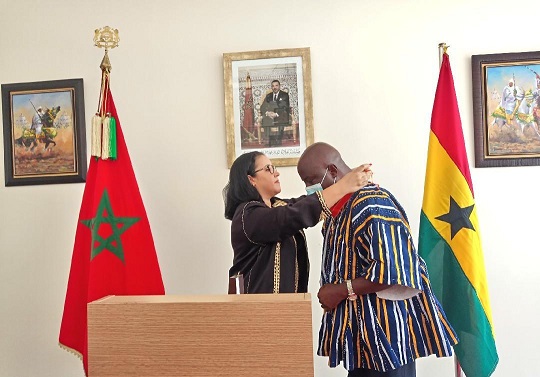 The Royal Kingdom’s decoration is awarded to foreign dignitaries who have distinguished themselves.

The award, presented by King Mohammed VI of Morocco, at the end of Mr Yakubu’s diplomatic mission in the Kingdom, was in recognition of his outstanding diplomatic engagements towards building strong ties between the two nations.

Madam Imane Ouaadil, the Moroccan Ambassador to Ghana, on behalf of the King, conferred the Alawite Wissam of Order of Commander on Mr Yakubu in Accra.

The citation accompanying the award read:
“Let it be known, through the present, may be the Almighty elevate and exalt its content, that We have, by the Grace and Might of the Most High, bestowed on: His Excellency Stephen Mahamadu Dawuni Yakubu, Ambassador of the Republic of Ghana with our Majesty, Alawite Commander Wissam, as a token of the appreciation and esteem he enjoys with Our Majesty. May it bring him prosperity and happiness.”

Madam Ouaadil said the honour was an indication that the King was committed to strengthening bilateral relations between Morocco and Ghana.

She praised Mr Yakubu for having acquitted himself with distinction during his almost four year (June 2017 to November 2020) duty tour of the Kingdom.

Madam Ouaadil said during the envoy’s duty tour, he strived to strengthen the relations between the two countries and dedicated his rich experience to the development and diversification of the excellent relations between Ghana and Morocco.

She said Mr Yakubu initiated several actions in the political and economic fields and “in so doing, Ambassador Yakubu has won the trust, the respect and the friendship of countless Moroccan people as well as among his peers in the diplomatic corps.”

Madam Ouaadil congratulated Mr Yakubu on his new appointment as the Upper East Regional Minister and wished him success.

Mr Yakubu, on his part, expressed gratitude to the King, the Government and People of Morocco for the honour and said it would serve as a treasure for life.

He said Ghana-Morocco relations was growing and that President Nana Addo Dankwa Akufo-Addo was committed to bringing the two closer as possible.

The event was witnessed by members of the Diplomatic Corps and Government officials among other dignitaries.