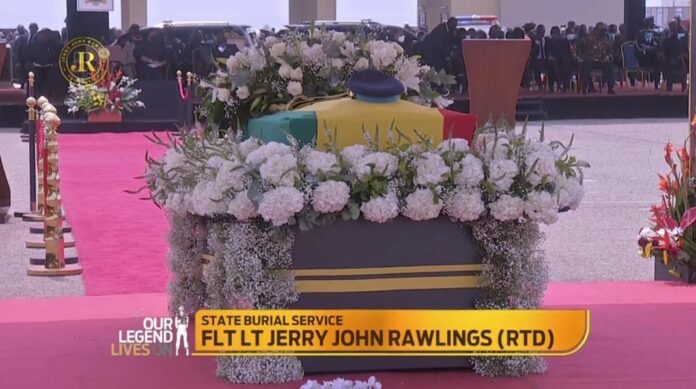 The body of former Ghanaian President Jerry John Rawlings was buried at the military cemetery here Wednesday after a burial service at Ghana’s Independence Square.

“It is for good reason that his well-known and often-cited ideals of probity and accountability, in which he invested a great deal of his political life, are enshrined in the fourth Republican constitution,” said Akufo-Addo.

He said these ideals, together with the “Freedom and Justice,” which form the motto of Ghana, constitute the foundational principles of social order on which Ghana shall develop.

He added that the monumental developments the country chalked “under the governance of Rawlings would linger in the hearts of many generations to come.”

“History, on balance, will be kind to him and will render a positive verdict on his contribution to the evolution of our nation and the entrenchment of its democratic institutions and culture,” the president said in his tribute.

Akufo-Addo reiterated his desire to name the University of Development Studies after the late Rawlings for his role in its establishment.